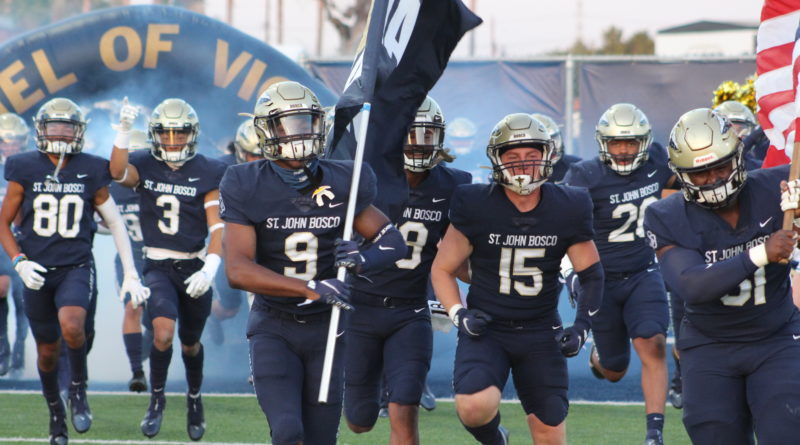 The 2021 high school football season kicks off across California this week (Aug. 29-21) with several big matchups. Here’s a look at the top Southern California games this week.

Nothing like some good Trinity League vs. Mission League action to get the season started. After winning a Mission League co-championship last season, Serra lost several key pieces, but with 5-star Texas commit Maalik Murphy and WR Rodrick Pleasant among their returners, the Cavaliers are unquestionably in the hunt for an undisputed league title and CIFSS Division 1 playoff birth.

Meanwhile, this marks Rod Sherman’s first game as OLu’s head coach, and it would be a massive statement win if the Lancers pulled off an upset win here. They’ve been going through a transition phase after a couple disappointing Trinity League campaigns, but they have way too much talent to sleep on, and might just be ready to start a new chapter with a bang.

Both of these teams are chock-full of young talent, and know that time is of the essence to get into form for some brutal schedules. Especially when each will be jockeying for some upper-division playoff seeding in what could be a Division 2 playoff preview.

There are too many great matchups and talented individuals in this one to name – as is the case with every game on this list – but among those returning for Oaks are QB Cole Tannenbaum, receivers Jashawn Todd, Khari Butler, and Chase Farrell, and 4-star DE/LB Sterling Lane, and 3-star CB/WR Jalen Lewis. With fewer bona fide Power-5 guys, Chaminade is an underdog in this one, but the Eagles have some very talented returners who are still in the up-and-coming phase of being a college prospect, including RB Paul Holyfield, WR Josh Mailander, DB Marquis Gallegos, and LB Ruben Gamboa. While QB is a major question mark with Jaylen Henderson now at Fresno State, ‘Nade has a load of returning talent in the trenches, including DLs John and Victor Crenshaw.

One of the Southern Section’s most underrated rivalries, the Battle of the Bone is the season-opener for Chino Hills and Ayala as usual. The Bulldogs come in as favorites, as they have every year for a while. They dominated Chino Hills 42-0 last season, and haven’t lost the rivalry match since 2017, although it did come down to the wire in both 2018 and 2019.

There’s a chance that Bryan Wilson and co. are going to beat the Huskies handily again, but it’s far from a given. Even if they’re still the fairly heavy favorite, a great game could be in the cards. Chino Hills should be better this season after a rebuilding campaign in the spring, and Ayala, while still very formidable, has gone from starting mostly seniors to having a horde of first-time starters. While there’s good reason to expect a good game, one can be assured that it’ll be a physical one.

After several years of developing into one of the better programs in the Southern Section, Apple Valley’s long-awaited chance to compete with the big boys has arrived abruptly. Led by 4-star Michigan commit Jayden Denegal and a deep cast of impact returners, the Sun Devils turned heads by beating Culver City after dominating league play in the spring, but if they can as much as put a major scare into the longtime Orange County juggernaut, their stock will again rise exponentially. That said, Apple Valley isn’t making the 100-mile drive just to say they a put a scare into ’em.

Nor is that what Mission Viejo has in mind this week. Without a particularly experienced senior class, the Diablos are more vulnerable than usual this season, but the talent is certainly there for them to retain their spot among the Southern Section elite. The bitter taste of losing to San Clemente in the spring finale likely has not gone away, and the likes of 3-star juniors QB Kadin Semonza and WR Mikey Matthews are in a hurry to prove that the next wave is ready to get Mission where it needs to go.

While this one isn’t taking place in California, it’s certainly a game to watch. This Warriors team has a great chance to be the one that finally takes Alemany over the top, with top-end, Power-5 talent for days. That said, another team that had championship aspirations and a laundry list of Power-5 talent was Narbonne in 2019, and those Gauchos got flattened by a Lone Peak squad that most people didn’t even give a puncher’s chance against them. The Utah juggernaut’s crack at Alemany – this one coming at home – is can’t-miss viewing.

5. Servite vs. Edison (at the Santa Ana Bowl)

It’s no secret that Servite has one of the most dangerous, exciting offenses in the country, and is an underdog to contend for titles all the way up to the national level this season. While the Friars have a laundry list of star players on both sides of the ball, the senior trio of QB Noah Fifita, WR Tetairoa McMillan, and TE Keyan Burnett is ready to show just how special they are if they have better injury luck this season. That makes the Friars heavy favorites against almost every and any team they could face.

But Edison is strong enough to make this intriguing. WR Nico Brown gives the Chargers some explosive top-end playmaking of their own, and even after losing an exceptional senior class, they have a deep group of talented players who aren’t afraid to match up against world-beaters. They’re a massive underdog here, but don’t be surprised to see a great showing from them.

We could have a potential San Diego Section game of the year candidate right out of the gate in this one, as both of these talented squads want to start on a strong note after 2-2 seasons. Both play brutal league schedules, so pre-season wins are at a premium. Both teams are led by big-time defensive lineman, with 4-star DE Gracen Halton looming up front for the Saints (and potentially playing some running back), and 3-star senior Mackavelli Molatumau battling in the trenches for El Camino. St. Augustine is the favorite, but it could turn out to be a thriller.

Two of the Inland Empire’s finest routinely do battle before league play starts, and as usual, Norco holds a clear but not overwhelming edge. The Cougars just came off a special 5-0 season in which they shocked Corona Centennial (and the rest of the football world) by ending Cen10’s 57-game Big VIII League winning streak. With QB Kyle Crum returning to lead the offense and one of Norco’s best defensive groups in a while, an even-more special campaign might see its first victory on Friday.

Reigning Southwestern League champion Vista Murrieta has other plans, however. The Broncos find a way to maintain very high-level football year in and year out, but with 4-star TE Jack Pedersen back in the fold alongside a plethora of big-time starters such as QB Brady Jones, this could be the game in which they prove they’re ready to compete for a Division 2 championship.

In yet another potential CIFSS Division 2 late-round playoff preview, two of the fastest-growing teams in L.A. County should both be ready for major fireworks to start the season. While both of these squads will face numerous other Southern Section alphas this season, this game provides both with arguably the biggest test they’ll face in the regular season, and perhaps their best opportunities to establish playoff position.

Inglewood has one of the most dangerous QB/RB duos in California and beyond in 4-star QB Justyn Martin and 3-star RB Tomarion Harden, both of whom will play in the Pac-12 next year. The Sentinels also have senior Pac-12 commits anchoring their defense as well in DB Clint Stephens and LB Taariq Al-Uqdah. That said, Coach James says this might be the deepest Inglewood team ever, so they have all the makings of a real problem.

Loyola parlayed an invigorating CIFSS Division 4 finals run in 2019 into an outstanding 3-0 spring season, which included wins over St. Bernard and St. Francis. While the Cubs have roster turnover at some key positions, they have experience and D-1 talent all over the place, including at RB with seniors Harrison Allen and Tahj Owens, on the O-line with Sam Yoon, and at WR with Jacoby Kelly. Both of these teams went undefeated in the spring, and neither want their streaks to end there.

Out-of-state games only come within striking range of the top of our weekly countdown under one condition: when both teams are nationally-known programs, and a national championship could be on the line.

And that’s exactly the case here, as 2019 national champion Bosco – the pre-season No. 1 in the SBLive Power 25 – hosts No. 18 Central, one of the premier programs in the South/East Coast and no stranger to national championship discussions.

The only SoCal-involved matchups of this caliber in the last few seasons would all heavily impact ensuing national championship discussions, whereas no Trinity League team won a national title from 2014 through 2016. Mater Dei’s 2017 victory over reigning undisputed national champion Bishop Gorman (NV) helped establish them in the conversation early that season and they would win unanimously; the Monarchs would repeat in 2018 after beating IMG Academy (FL), despite finishing with a record of 13-2; Mater Dei’s decisive victory over national No. 2 St. Francis (MD) in 2019 practically guaranteed that whoever would win state would be widely considered the national champion, and that would be St. John Bosco.

Earlier this month at Trinity League Media Day, SJB head coach Jason Negro said that a national championship is one of the Braves’ biggest goals this season, just like any other season. History says that as far as this particular goal goes, this game is probably their very biggest of the regular season. And it’s always a thrill to watch two titans from across the country do battle.