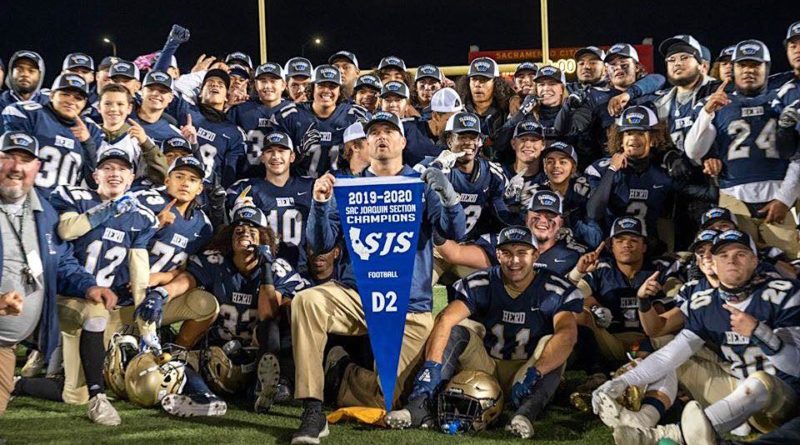 SBLive is previewing the Top 50 high school football teams in California ahead of the fall 2021 season. Here’s an inside look at the Elk Grove Thundering Herd of the CIF Sac-Joaquin Section, the No. 26 team in our countdown.

Burnett ran for over 1000 yards and 11 touchdowns as a sophomore at Capital Christian in 2019. He’s a 3-star prospect with seven offers including Colorado and Fresno State, and enters his senior season as one of the premier rushing threats in Northern California.

Pale is a 3-star guard who’s already been offered by five Pac-12 schools before starting his junior year. He’ll also have a heavy role on defense this season. Coach Heffernan says Elk Grove’s biggest strength is in the trenches, and calls Pale “the leader of that group for sure.”

Maze is another two-way lineman Heffernan calls a leader of the team and one of its best players.

A running back and linebacker by trade, Archuleta will be a featured playmaking threat this season under center. It’ll be his first year as a full-time quarterback, but Elk Grove’s system thrives with QBs who are primary rushing threats. Additionally, while Archuleta is primarily a RB prospect at the college level, most of his varsity reps have come at OLB – as a sophomore in 2019, he made 96 tackles.

A big OLB who can play numerous positions in the front seven, Heffernan expects Vi to be among the team’s main defensive anchors this season. He’s also likely to be a factor at RB.

A DT by trade, Finau will be a two-force for in the Herd’s trenches this season. He’s received multiple D-1 offers since football resumed earlier this year.

Bellecci is likely to be Elk Grove’s top receiving threat, and also a major factor in its secondary.

In addition to Pale, Maze, and Finau, Elk Gove has a litany of two-way linemen who Heffernan considers to be among its top players. That group primarily consists of Aisake Tausinga, Kylan Fontes, James Minot, James Cocker, Dallas Fineanganofo. Together, they form one of the absolute deepest lineman corps in the state.

Without a doubt, Elk Grove’s ceiling is an undefeated regular season and section title run, which would put them in good position for state playoffs as well. While the Thundering Herd will play many teams in the Sac-Joaquin Section’s upper-echelon throughout the regular season, they’ll be considered the favorite in just about every game they play.

There are not many teams in California that can match up with Elk Grove up front. With Pale and multiple other D-1 prospects in the mix, there’s top-end talent. And with so many starting-caliber guys in the fold, the Herd is abundant in depth in the trenches. There are some absolute giants in the 350-pound range, and numerous agile run-blockers. While the O-line is likely to be their biggest strength, Heffernan is excited about the entire group’s two-way capability. With former RB Ethan Archuletta moving under center and 3-star RB Zeke Burnett starring in the backfield, Elk Grove’s offense has all the tools it needs to continue putting out one of the state’s most prolific ground attacks.

In 2019 (the last time they played a real season), their defense was good throughout the first several weeks of the season, but really picked it up down the stretch of league play and in the postseason. If they can defend at that level consistently, they’ll have a real shot at a CIFSJS Division 1 championship.

Per Coach Heffernan, there’s no reason to expect any lingering negative effect from only getting in one regular season game last season.

“It was frustrating, but we’ve put it all in the past,” he said. “We don’t talk about it or dwell on it. We used it more as a spring ball situation to see who could do what and get some younger kids some experience. It’s unfortunate we didn’t get to play, but our thought was, let’s use it as a practice time.”

After Elk Grove missed essentially all of the 2020-21 season, there’s only so much that can be projected, but it’s hard to see the Herd too far from the top of the section. They have a sense of comfort and identity within their flexbone triple option system, and have top-end talent that matches a system they’ve already found success with. Elk Grove will be a little more reliant on two-way impact players than in some recent years, which means injuries could be costly, but otherwise, expect them to look the part of a contender for the bulk of the season.

“We always preach brotherhood and talk about being family. I know that gets overused a lot, but we truly believe that we have a brotherhood at Elk Grove. These kids really care about each other, hang out with each other, work hard for each other, and celebrate each other’s successes, not only their own. It’s really a culture of sacrifice. And it definitely has a family feel.

“The kids know we love them. We legitimately love the kids, and in return, they love each other too. When we do get on them, they respond well to it because they know it’s coming from a place of love. It’s always been that way, and I wouldn’t want to coach any other way. “