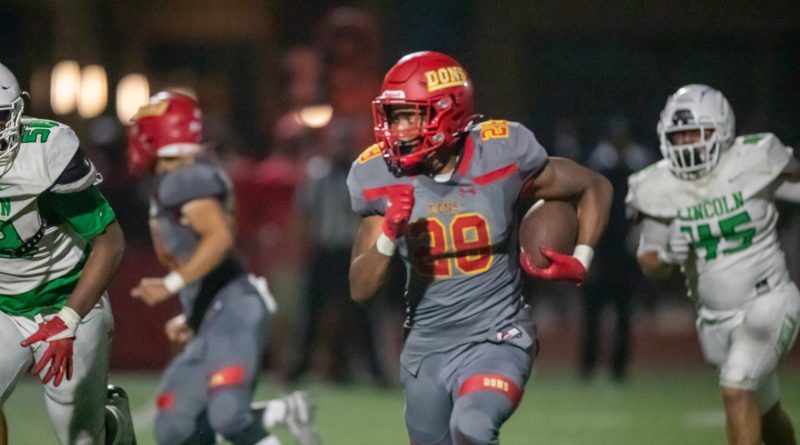 The 2021 high school football season kicks off this week in the CIF San Diego Section, and Cathedral Catholic is on top to start the year.

Here are SBLive’s preseason Top 10 San Diego Section high school football rankings. The rankings are compiled by reporter Bodie De Silva and will be released every Monday throughout the fall 2021 season.

The Dons return 14 starters from last season’s team that scored 41 points or more in each of their five games and recorded four shutouts. Their schedule includes trips to Corona Centennial and De La Salle.

The Lancers are coming off a spring season in which they went 5-0 while allowing just over eight points per game. Sophomore quarterback Julian Sayin take over under center and is on his way to being one of San Diego’s top quarterbacks in recent memory.

Mission Hills was unbeaten during the spring season and held four of their five opponents to single digits. Quarterback Gunnar Hensley and linebacker Jaiden Letua are among their top returners.

Lincoln features two of the best defensive backs in the country in Jalil Tucker and recent Oregon commit Jahlil Florence. Junior running back Roderick Robinson is set for a breakout season.

Washington commit Jackson Stratton is poised for a huge senior season with top target Makai Smith back in action. The Vikings have moved into the difficult Western League after back-to-back Eastern League titles.

The Wildcats should be excellent up front on both sides of the ball with senior Mackavelli Malotumau leading the way. Senior quarterback Kiah Reid is one of the county’s most experienced signal callers.

Senior defensive lineman Zach Rowell leads a defense that picked up valuable experience during the spring season. Junior Remi Baere takes over at quarterback after playing in four games during the spring.

The Crusaders are the clear favorites to win the San Diego Section D3 Championship. Two-way athlete Cruz Estrada will become a household name after sitting out the spring season.

The Titans went 4-0 during the spring season, beating Otay Ranch to clinch the Metro-Mesa League title. Senior outside linebacker Trey White is a big playmaker.