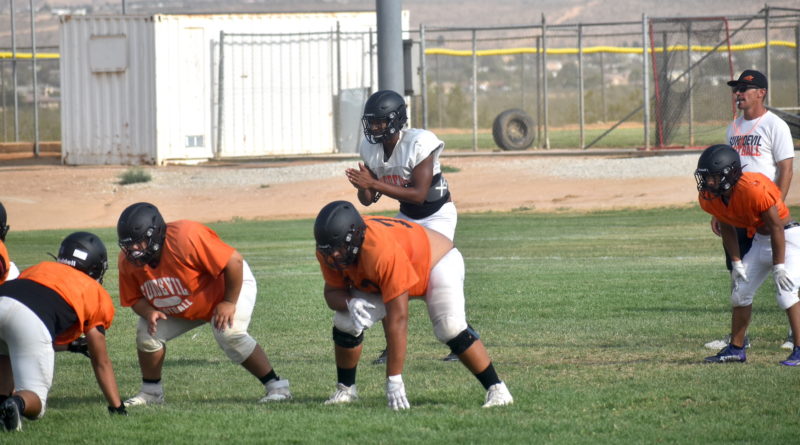 SBLive is previewing the Top 50 high school football teams in California ahead of the fall 2021 season. Here’s an inside look at the Apple Valley Sun Devils of the CIF Southern Section, the No. 28 team in our countdown.

A 4-star Michigan commit, Denegal completed 70 of 108 attempts last season for 958 yards and 12 touchdowns with no interceptions, good for a passer rating well above 130. He also established himself as a significant rushing threat, running for 130 yards and nine touchdowns. Denegal is the reigning Mojave River League Offensive Player of the Year.

The 6-7, 340-pound LT already has multiple Power-5 offers, and could very well prove to be the Inland Empire’s top offensive lineman in his upperclassman years. He also might see some situational snaps at NG. Pulido was first team all-league last season.

Coming off a stellar junior season and some excellent camp performances, Hambrick has been one of the IE’s top breakout MLB’s this year. In the spring he led Apple Valley with 32 tackles and six tackles for loss (tied) in five games, and also recorded an interception. Now a 3-star prospect, Hambrick recently committed to Boise State, one of five D-1s to offer him in the span of about a month.

In the spring, Reynolds won MRL Defensive Player of the Year as just a sophomore. He recorded 30 tackles, and was tied for first on the team with six TFLs and four sacks.

Coach Godfrey: “As crazy as it sounds when he already won Defensive Player of the Year, I’d say he’s one of our [biggest breakout candidates]. I still think a lot of people outside of our league or community don’t really know him yet, plus he’s still just a junior.

A 3-star CB prospect with multiple D-1 offers, Ojeda’s primary position for Apple Valley is FS. He made first-team all-league on defense last season and will likely start at WR as a junior.

Reed made First Team All-MRL at nose guard last season, and this fall he’ll also start at right guard. He didn’t put up big numbers on defense as a junior, but Apple Valley’s coaches say it was one of the most critical reasons for their defensive success.

Another reigning first team all-league lineman, Arias stands only 5-9.5, but is well over 300 lbs. and has been a major factor as the Sun Devils’ starting LG since his sophomore season. Coach Meras said he’s one of the most fundamentally sound lineman and overall strongest, toughest players on the team.

Coach Meras: “He hasn’t given up a sack in three years. He’s just as nasty as it gets. He might be our best all-around offensive lineman.”

Most broke out as a star RB last season, running for 469 yards and five touchdowns in just four games, and also catching for nearly 100 yards. This season his pass-catching role at RB will probably be even greater, and he could see some snaps at WR. The All-MRL first-teamer will also see heavy minutes at OLB this season.

Moon is a strong route-runner with good size for a WR on offense, and was second on Apple Valley with two interceptions last season as well. He was also named First Team All-Mojave River League, and will start at both receiver and corner again as a senior.

A starting OLB who also plays SS, Downing made first team all-league last season after recording 17 tackles, four TFLs, and an interception. He’ll also play a major role at receiver this season, and is a team captain. A safety by trade, Downing has multiple NAIA offers as a SS prospect.

Eck finished with 18 tackles, four tackles for loss, three sacks, and a forced fumble in five games as a junior, and was named First Team All-MRL. He’s relatively light for a DE at 6-3, 205, but is very built and only 9% body fat. Eck is an excellent physical specimen for a lighter lineman and one of the highest-upside seniors on the team, and has already received interest at the mid-major level.

Guillen made First Team All-MRL as the Sun Devils’ RB2 last season, but saved his best performance for their last game of the season, running for 116 yards in a win against Culver City. He also sees occasional minutes at safety. Coach Godfrey says he’s one of the team’s top candidates to break out at a higher level.

After several years of constant growth, the cat is officially out of the bag: Apple Valley is well-positioned to have its best season ever.

The Sun Devils could be looking at a double-digit win season and real shot at a Division 2 title if they are close to full-health for the most important stretches of the season. In the spring, they won the Mojave River League by an eye-popping score margin of 179-21, and went on to beat Culver City to finish 5-0. And of the 19 Sun Devils who made all-league last season, 10 first-teamers return this fall – not to mention the OPOY (Denegal) and DPOY (Reynolds). While they’ll sorely miss a handful of seniors, this team is set to build on what was already the strongest season in school history.

Expectations are high internally and externally for an upperclassmen-heavy squad that has been widely ranked in the state’s top 30 for the first time ever. The Sun Devils are building something that won’t end after this season, but it’s no secret that with a special senior class, this is the year to contend. But according to the players and coaches, the sense of pressure around the expectations is minimal. This team is excited for the opportunity to embrace it.

Apple Valley is a safe bet to finish in Division 2 or around the top of Division 3 if they have good luck health-wise. With most of the 2020-21 team back, not much is left to guess about.

The Sun Devils have three games to start the season off against some of the best, highest-profile programs they’ve ever faced – Mission Viejo, Rancho Cucamonga, and Murrieta Valley, in that order. While there’s a solid chance they come out of that stretch with a winning record, it seems that their worst-case scenario for this season (unless injuries heavily derail them) would be to drop those first three games, still finish with a 7-3 record and supremacy amongst the High Desert, and come into the Division 3 or Division 4 playoffs as a major frontrunner.

Health is going to be even more important for Apple Valley than for many other upper-division contenders. With less depth than a lot of traditional Southern Section powerhouses, the Sun Devils have numerous key players going two ways, and not a lot of upperclassmen looming on the bench ready to be thrust into big roles.

“I’m lucky to coach these guys. I wouldn’t disagree with anyone saying it’s the most stacked team in school history. I was fortunate to have a lot of them back when I was the freshman head coach.

“When you look at the kids who we have, and where they’re going after high school, you have to schedule teams like Mission Viejo or Rancho Cucamonga. It’ll be a gauge, a test of where we are physically and mentally. Our goal is to always have a chance to compete for a CIF championship, and at high levels, that’s where we’re going to see teams like them.

“You have a group of kids that has never been in this spot, in that, they have a target on their back. We’re not a surprise team any more. We’re going to get everybody’s best. If we play down to competition, that will be a problem as soon as the playoffs start. But if we do what we think we should do, and we build on each week, we should be ready for the playoffs.

“We’re going to find out real quick here what we’re made of. I know our kids are excited. I would say our strongest points are our quarterback and our offensive line. On offense we do everything. We get in and out of formations very quickly and effectively.”

“This group has a short memory. We are feeding into them, forget about last year. Forget about what you did, the success some of you had… what are you going to do for this team to keep the legacy going? They want to stamp their own stamp on the history of Apple Valley High School before they leave. They’re just so damn competitive.”

“We get better together… our front five are some destructive guys. They’re huge, and they make it a competition to see who can put the most people in the ground. That only makes the D-line stronger because we want to compete and match that energy, so I feel like, we’re only going up.”

“This group right here is a very special group. We’ve been growing up together for a very long time. Between last season, this season, we’ve known since sixth grade that this is our year. And the bond we have just makes us want to work harder so we don’t fail our other teammates. That’s our purpose – we play for the other players on our team.”

“We love each other, we trust each other, and we play for each other. We go out there and play like it’s our last game together every week.”