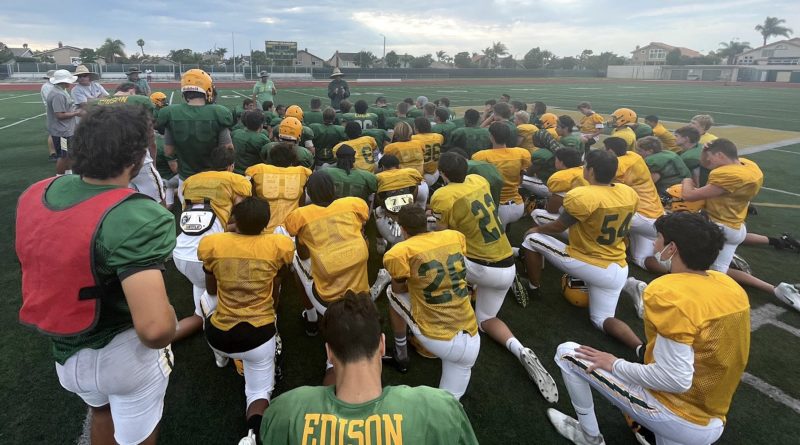 SBLive is previewing the Top 50 high school football teams in California ahead of the fall 2021 season. Here’s an inside look at the Edison Chargers of the CIF Southern Section, the No. 31 team in our countdown.

Coach Grady: “I think in the spring he just matured physically. He takes his health, his training, time in the weight room seriously, he’s all in. His explosiveness jumps out at you and makes us a different team.”

Hampton caught for 208 yards and four touchdowns as a junior, and was named Second Team All-Sunset League.

A 2023 transfer from Mater Dei, Hurley has a strong chance to be an impact player right away. Grady described him as savvy and smart.

Awad is another junior transfer from Mater Dei that Coach Grady is excited about, and the Chargers’ likely QB1 heading into the season.

Gregory was third on the Chargers with 48 tackles last season, and also forced a fumble.

Coach Grady: “He’s a leader by example, does things the right way.”

Grbic was second on the team with seven tackles for loss and 5.5 sacks last season en-route to making first team all-league.

Coach Grady: “Grbic is very explosive. He can fly for a lineman. I mean, he can flat-out run.”

Another all-league second teamer, Fletcher led Edison with two interceptions last season. He’s also gotten occasional reps at receiver and tailback the past two seasons, but Grady expects him to have a significantly larger role on offense as a senior.

Despite losing a stacked senior class, Edison should remain a clear upper-division playoff contender from start to finish this season. In addition to returning a handful of all-league members, the Chargers have a strong, deep junior class filled with guys who are ready to break out as high-level starters. Without a doubt, they have a strong chance to be a major playoff threat as high as Division 2.

Unless there’s a bad case of the injury bug, Edison has a very high floor, and is a safe bet to land in one of the Southern Section’s top playoff divisions. Even in a year when the Sunset League has one of its deepest groups in generations, the Chargers are likely to be somewhere near the top.

While expectations are always high for the long-time Huntington Beach powerhouse, Edison was even better than many expected in the spring because numerous returning seniors had major individual breakouts. Many impact starters from last season’s squad will be back as upperclassmen, and depth isn’t usually as much of a question mark for the Chargers as many other CIFSS heavyweights – the foundation for a contender is clearly there. So, whether they’re a very good team or a truly dominant one will largely come down to how many already-good players prove themselves as stars.

“I’m not one to look too far to the future. We just try to do what we can today, that’s what we talk about every day. Win the day, find something to get better at, and tackle tomorrow when we get to tomorrow.”

“We’ve tried our best to maintain the culture that’s been at Edison for 50 years. That’s a challenge, to be a really good program for 50-plus years. What we try to do is maintain it, and then take it to the next level. Our guys are really close, they grow up playing together, going to school together, it makes it really fun to watch. We have a great sense of our community at our school, and in our program… Our players play for one another – they’re all close and there’s good leadership, and that’s the sign of a good Edison team. We practice physically, and that’s been the mentality here for many years. We’re not going to be the biggest team most nights, but we play hard and our guys fly around.”