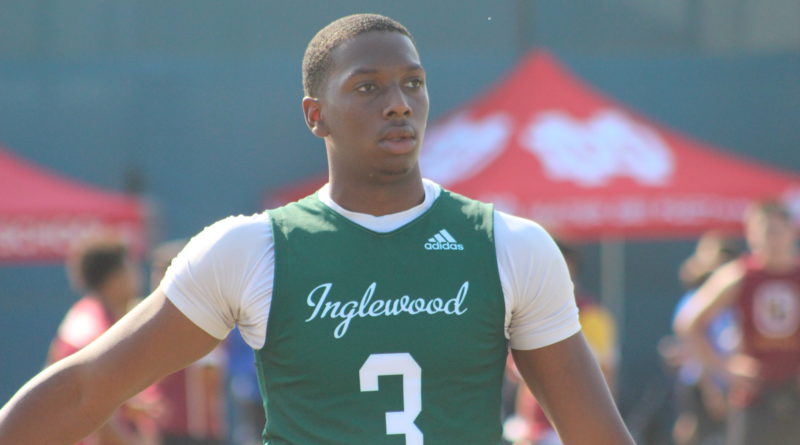 SBLive is previewing the Top 50 high school football teams in California ahead of the fall 2021 season. Here’s an inside look at the Inglewood Sentinels of the CIF Southern Section, the No. 29 team in our countdown.

Coach James: “Justyn is a dual threat quarterback and he leads our team. He’s a remarkable person to be around. His ceiling is so high at this point. He’s going to be a force to be reckoned with in college.”

Coach James: “Taariq is a versatile linebacker who can cover like a defensive back but is still physical in the trenches. He probably projects as a defensive back at the next level, but he can do it all for us.”

Coach James: “Clint is a really good defensive back. He’s physical and athletic. He’s great in press man and in zone. He’s an elite player.”

Coach James: “Tomarion is extremely versatile. At 230 pounds he has enough power to lower his shoulder and get the tough yards. He’s a home run hitter who can score from anywhere on the field.”

Coach James: “Charles is a great defensive tackle for me. He’s a kid who pops on film. He’s got a really quick first step. He’s just a really dynamic football player.”

Coach James: “Marshon has a super high motor. He’s really quick and will be a nightmare for the quarterback.”

Senior Cal commit Justyn Martin will be the starter for the Sentinels.

Inglewood could win a Section championship if they get placed in a Division that avoids some of the Section’s heavy hitters. The Sentinels’ numbers aren’t huge (they’ll be in the 40’s according to Coach James), but the talent they do have is very tough to match. Loyola, St. Francis, Palos Verdes and Leuzinger are all tough games on the schedule, but a 10-0 season isn’t out of the question.

The most realistic scenario for Inglewood is winning the Ocean League and advancing to at least the quarterfinals of their playoff division.

“My expectations are always the same. I just want my kids to compete. I don’t go into a season projecting wins and losses. Every coach’s goal is to get better every day. We have some good young guys mixed with a few older guys. I’m just trying to build the program the right way and make sure our kids get better.

“One of our strengths is depth. This is one of – if not the deepest – team Inglewood has ever had. It’s not really a lot compared to other teams, but for us it is. We have a lot of depth in the trenches. I want the team to get more consistent in camp and work on being more detail oriented. I also want us to stay healthy and safe. It’s a crazy world out there right now.”