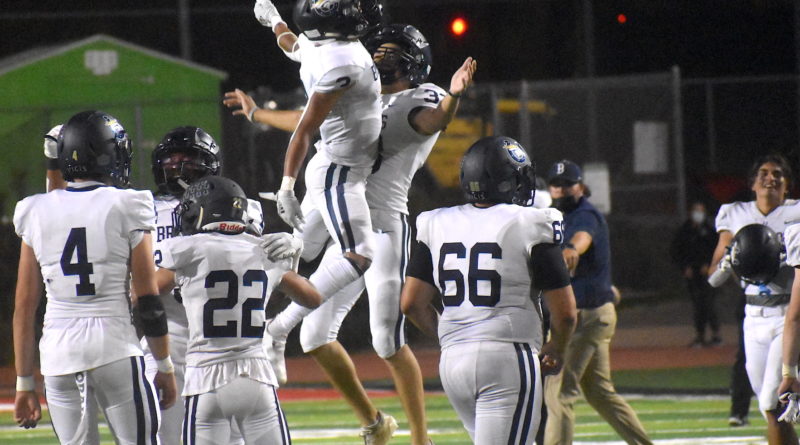 SBLive is previewing the Top 50 high school football teams in California ahead of the fall 2021 season. Here’s an inside look at the Vista Murrieta Broncos of the CIF Southern Section, the No. 34 team in our countdown.

2021 SPRING SEASON AT A GLANCE

Coach Peterson: “Tremendous talent who’s undiscovered. I think this is his breakout year, somebody’s gonna get a diamond in the rough.”

Coach Peterson: “Returning defensive player of the year in the league. In five games he had 86 tackles.”

HOW DID THE SPRING SEASON AFFECT VISTA MURRIETA?

“You spend so much time trying to create hope, people stopped believing that it was actually gonna happen. The spring season allowed us to come together and create some positivity for kids and families that school was still important and gave them a reason to care. We had a really good group of seniors and they deserved to play, and it gave the juniors an opportunity to stay engaged moving into their senior year. Some of these guys have been playing for a long time and they’ve been looking forward to it and all of a sudden, it’s gone or changed or different than what they thought it was gonna be. The same opportunity that was afforded to everybody else wasn’t there for them and it was out of their control. For us it just spring boarded a little bit of what was possible, what we could do as a team and how we could grow as people.”

Senior Brady Jones will be the starting quarterback for Vista Murrieta. Jones was named as the Southwestern League’s Most Outstanding Player during the 2021 spring season.

Vista Murrieta’s opening game against Norco will be a battle. The Cougars were 5-0 in the spring, including a win over Corona Centennial and return 17 starters. If the Broncos can grab a win in the opener, they’ll be on everyone’s radar across Southern California as they head into additional non-league matchups that include Tesoro and Upland. With experience and talent across the offensive side of the ball, Vista Murrieta will be a tough out for any opponent they come up against.

The Broncos look to be strong favorites in the Southwestern League, hoping to build on their 4-0 league record during the spring season. They’ll finish off the regular season against Murrieta Valley and Murrieta Mesa looking to make a deep run in the Southern Section playoffs.

“I don’t have a bad kid on this team. It’s a really good group of people … The strength of the team is they’re not too high, not too low they’re just good kids. I don’t know if that’s gonna translate to wins or not but history tells us it is, but we’ll see.”

“We’re always working on speed of play and tempo at practice, I think that’s the key to success. How fast can you transition, how fast can you play. Not on Friday night but on Monday through Thursday. What is the temp of what we’re trying to work on? If you’re willing to put the work in, it’s gonna be successful. The definition of success is not always to win, it’s creating the best version of yourself.”