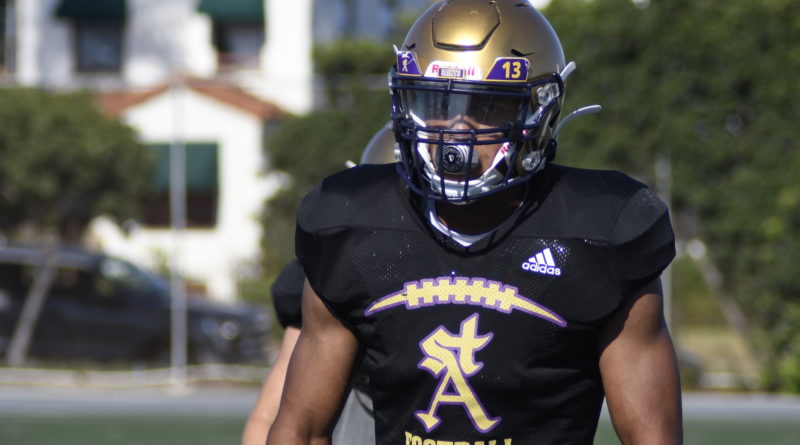 SBLive is previewing the Top 50 high school football teams in California ahead of the fall 2021 season. Here’s an inside look at the St. Augustine Saints of the CIF San Diego Section, the No. 35 team in our countdown.

Coach Kremer: “He’s probably our most talented football player. We’re gonna need him to help out leading our defense, he’s been a young guy his whole career. Our defense is gonna go as Gracen goes. Whenever he’s putting out great effort, it feels like the rest of our defense feeds off him. He should help us on the other side of the ball at running back and a little bit at tight end.”

Coach Kremer: “He’s got an unbelievable motor, he’s one of those guys you have to take care of in practice because he’s gonna go so hard. He’s doing a great job leading our group as well.”

Coach Kremer: Jake and his brother Luke (Senior OL) are unbelievable men, great students. They’re both very important to our team not only playing but as steady forces.”

Coach Kremer: “He’s playing right tackle for us; we’re looking for him to really anchor us on the outside. He’s got a lot of potential and he loves the game of football.”

Coach Kremer: “Isaiah has worked so hard in the weight room; he worked his butt off last year and got hurt the second game of the spring season. I’m really looking forward to seeing Isaiah get a full year and what he can do.”

Senior Kyle Herberger will be the starter for St. Augustine.

“He’s been around our program and has worked extremely hard, he’ll be a first-year starter as a senior. The thing about Kyle is he’s just a Saintsman, everything you want to be a steady guy, he’s out there getting in extra work right now. He’s got an extremely strong arm; he can make every throw. I’m very excited for Kyle to get his opportunity and to see what he can do,” St. Augustine Head Coach Joe Kremer said of his signal caller.

The Saints loaded up with an incredibly difficult schedule featuring teams from all over Southern California. Starting strong against El Camino will be a big key with games against Oceanside, Santa Margarita and Steele Canyon looming over the following three weeks. In order to make a strong playoff push the Saints will have to be ready for road games, playing six of their ten on the road. Having played all four games during the spring season away from home, they may just be ready for that challenge.

“I don’t really have expectations for the group, we have goals. I’d like to see the team be the best we can be. We’re not super deep but we have some very talented players. I don’t think we’ll be two or three deep at every position but my expectations are that they’ll play as hard as they can play and wherever the chips fall then that’s where they’ll fall.”

“Our style on defense is we’ve been very aggressive over the last decade and that’s because we have defensive backs that can cover in man coverage. We were able to get those guys some experience in the spring season with the four games we had so I’m looking for that skill group to step up and make some plays for us.”