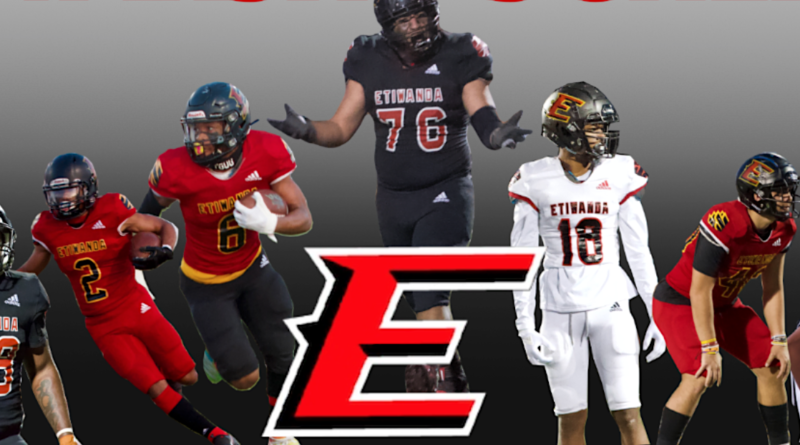 SBLive is previewing the Top 50 high school football teams in California ahead of the fall 2021 season. Here’s an inside look at the Etiwanda Eagles of the CIF Southern Section, the No. 37 team in our countdown.

All regular season games are at 7 p.m.

A 4-star prospect with upwards of a dozen offers, Roney can play anywhere on the defensive line but is usually on the inside. As a sophomore in 2019, he recorded 89 tackles, six tackles for loss, and three sacks.

Williams, a high 3-star prospect with seven offers, was not only one of Etiwanda’s top deep threats in the spring, but also accounted for the vast majority of its rushing production with 384 yards and seven touchdowns rushing. In 12 games as a sophomore in 2019, he caught for 1,218 yards and 11 touchdowns, ran for 242 yards and two touchdowns on over 12 yards per carry, and chipped in nearly 300 KR yards to boot. Williams is likely to lineup up at WR most of the time again this season as Etiwanda looks to spread the field more, but remains one of the most versatile offensive threats in the state.

Vasquez missed his entire junior season due to an injury, but had a very productive sophomore campaign. In 2019, he threw for 2,264 yards and 15 touchdowns in 12 games, and also ran for 259 yards and seven touchdowns. If he can stay healthy and improve a bit on his efficiency from two years ago, Vasquez, who has reclassified to 2023, could prove to be one of the best QBs in the Inland Empire.

Congalton was very steady playing full-time QB last season, throwing for 593 yards and three touchdowns on over 68% completion. He still has a chance to earn the starting job this season, but at minimum, he’ll be one of the best second-string QBs around.

McGee is a standout at either linebacker spot and also at defensive end. In just eight games as a sophomore in 2019, he recorded 80 tackles (three for loss).

Harrison was a force in his brief sophomore campaign. He recorded nine tackles and three tackles for loss in Etiwanda’s win against Chino Hills alone.

Toki also had a standout campaign at LB this spring.

Yet another athletic, multi-positional member of the front seven, Settle will likely start at DE but can also play both linebacker spots.

A versatile D-1 prospect transferring in from Rancho Cucamonga, Maiava has a good chance of helping Etiwanda right away at RB and/or LB.

With Jordan Williams and Dejon Roney anchoring the offense and defense, respectively, Etiwanda has serious top-end talent. Even against some great opponents, there will be many games where the Eagles have the clear-cut most dominant player on the field at all times. On top of that, they have a deep list of returning impact players on defense, and should have one of the better front sevens in the whole section.

Now ready to go after having an All-Baseline League sophomore campaign in 2019, Vasquez’s return adds a lot of intrigue to this offense. Congalton’s presence is also a huge boost. The Eagles really need some new playmakers to step up on offense in order to compete with the established Southern Section elites, but if that happens, they really can. If everything goes perfectly for Etiwanda, look for them to emerge as the frontrunner in the Southwestern League after a manageable preseason, and potentially pull off an undefeated regular season. That would make them a clear Division 2 title contender.

Defensive depth like Etiwanda’s is a major precursor to stability. Williams can be a one-man army on offense, but he shouldn’t have to be. Maiava at RB and WRs Norian Espardon and Julian Walker are perhaps the top candidates to carry the load. Even without any national recruits on it, Etiwanda’s O-line was generally quite strong last season, and is likely to be again.

The Eagles have big-time opponents week after week all regular season long, but overall, their schedule is pretty manageable relative to their talent level. Even with some room for growing pains if needed, the odds are great that Etiwanda wins a lot of games this season and lands in a top-three division if healthy.

“Our goal this year is to win and that means the classroom, on the field, the weight room, and off the field. Coach Baiz talks about it all the time, we have to be winners to succeed in every aspect of life.”

“I think we have really special talent at the E … football is brotherhood. We love our brothers and protect them at all costs.”

“Expectations are at a high. This team is very special, we got guys with that chip on their shoulder playing for something bigger – that ring baby! To rep the E you most certainly have to be dominant, and it takes just a different type of swag… off the field we rep the E with pride.”