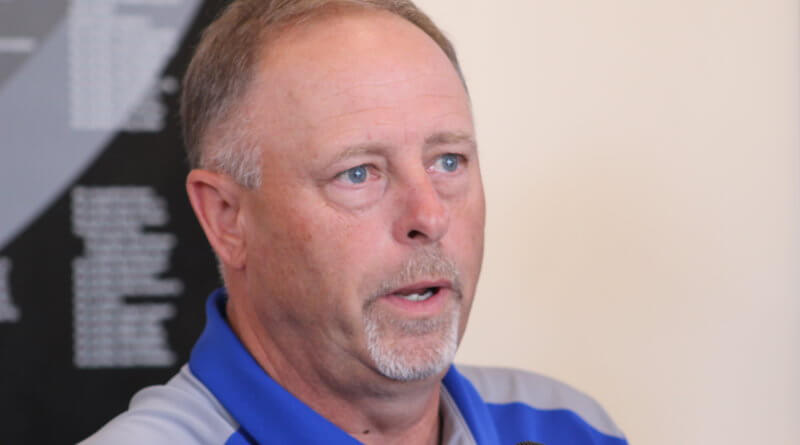 SBLive is previewing the Top 50 high school football teams in California ahead of the fall 2021 season. Here’s an inside look at the Bishop Amat Lancers of the CIF Southern Section, the No. 43 team in our countdown.

Coach Hagerty: “He’s matured a lot. We’re coming off of a really disappointing season after going 1-4. Everyone has been a little more dedicated and more alert to making sure we’re getting better. Tobin is the key for us. He’s doing a really good job.”

2021 spring stats: Franklin was primarily a special teamer as a sophomore

Coach Hagerty: “He’s getting bigger and stronger and is gaining experience. He’s getting better every rep. I think he will help us up front.”

Coach Hagerty: “Chavez is one of two returning All-League players for us. He’s going to have a chance to play at the next level. He’s a real smart kid — Ivy League type. He moves his feet well.”

Coach Hagerty: “He’s a kid who played for us last year and gotten bigger, better and stronger. We expect him to have a pretty good year too.”

Coach Hagerty: “Mark is a big and rangy guy. He’s pretty aggressive and a good tackler. He knows the defense. We’re excited about him.”

2021 spring stats: Made 25 tackles and had an interception.

Coach Hagerty: “He’s somebody that’s going to have a big year for us. He struggled a bit last year but as a sophomore he played well and I think this year’s he’s really going to rebound. He’s focused and we’re going to need him because we’re going to see a lot of good receivers.”

Bishop Amat had one practice before having to shut down camp due to COVID-19. Their Aug. 19 game with Servite will likely be moved to Week 3 (Sept. 10) as a result.

Tobin O’Dell, a senior, will be the starting quarterback.

Amat has some new assistant coaches this season. “I’ve lost some really key guys that have been around, for no negative reasons, they’ve just moved on with their lives and are doing other things,” Hagerty said.

In the past two seasons, offensive coordinator Sean Koelle has gone to Servite, defensive coordinator Mike DiFiori took a job at Cal Lutheran and cornerbacks coach Daylon McCutcheon has stopped coaching because he wants to watch his son Dyson play at Washington. Like any team replacing three major assistants, it’s been tough for the Lancers. This season Hagerty is hoping to get all of his new additions on the same page following the spring COVID season.

Hagerty’s son Zach is now the offensive coordinator and Hagerty has hired ex-Sierra Vista co-head coach and Premium Sports Recruiting Director Matt Villasenor to coach receivers. Villasenor instantly gave Amat some buzz because of his ties to college coaches, social media presence and track record as a high school coach that turns programs around. In the past four years, Villasenor has worked at LA Wilson and Sierra Vista producing winning seasons at both schools. Winning in the Mission League will obviously be a bigger challenge, but Hagerty says through the first few weeks of having him on board, Villasenor has made a solid impact.

“Matt is a good receiver coach,” Hagerty said. He’s doing a good job. The kids like him. He’s definitely somebody that fits well with our staff. He’s made a nice transition.”

For years, Bishop Amat has been the premier private school in the San Gabriel Valley when it comes to football. Damien and head coach Matt Bechtel are now trying to change that. The two teams will play on September 24th at Bishop Amat. The game used to be a big rivalry but hasn’t been played since 2011. For Hagerty, while he’s excited about it, he’s treating that game like any other.

“Any time we play Damien, it’s always been a big game,” he said. “That game is a preparation for the tough league we’re in. Hopefully we continue playing for a long time. It’s a good game for our area.”

The best case scenario for Bishop Amat is a second or third place finish in the Mission League. Amat had a down spring and Hagerty wants to get his team back to playing his style of football: smart and physical. If the new assistant coaches work well and Hagerty is able to once again establish the culture he wants within the program, the Lancers should have a good season.

Being right around .500. The big question this season for Bishop Amat is do they have enough talent to win the Mission League? On paper, it looks like that most likely isn’t a possibility.

“We’re a developmental program and when we don’t get time to develop, we’re not very good. When our development period is skipped and we have to jump right into a season like we did last year, what you see at 1-4 is what we are because we had a bunch of kids on the field that probably weren’t ready to be there. Having a summer has helped us a lot. It’s critical. Our program can’t survive without us having time with kids to get them where they need to be.

We have a certain culture at our school that helps us be successful and COVID became our culture. For example, when kids showed up late, we couldn’t hold them accountable. It was understood that everyone was doing their best to get there. We really felt that in the offseason we needed to draw that line again and say you can’t straddle the line anymore. You’ve got to get on the right side or get out. I don’t want to sound like we don’t care about other people, but it’s important that kids earn their spot to be out there. Our expectations for this year are to reestablish our Bishop Amat culture.

We have a good amount of returners coming back, but some of them were playing before they should have been. We were in fifth place last year in the Mission League and I’m not sure today we’re better than any of the four teams who finished above us. Our expectations are that we play Bishop Amat football – being disciplined, physical, know our stuff, make few mistakes and play for each other. If we do that, I like our chances.

In terms of strengths, our guys up front on both sides of the ball I think are going to be pretty good. Our QB should be a strength too. Tobin is a great kid and a great leader. Overall, we just need to get better at what we do.”