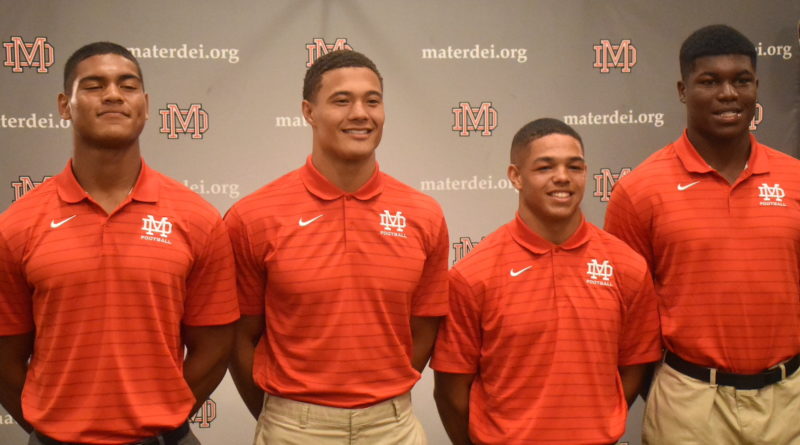 LONG BEACH, Calif. – With California high school football season around the corner, the Trinity League put on its second ever football media day on Friday at The Grand in Long Beach.

Each team was represented by its head coach and four players – five in Servite’s case – with the opportunity to address the media before fielding questions. Here are photos and takeaways from each team’s appearance.

It’s no secret that 2019 national champion St. John Bosco has its eyes on a league, section, state, and national championship run every single year. In 2021, the Braves return eight starters on offense and nine on defense. (It would be 10 on defense, but star sophomore LB Kyngstonn Viliamu-Asa will miss the season with an injury. He is expected to make a full recovery before the start of his junior campaign.) On top of it, there are over 40 seniors on the squad. So, expectations for Bosco are as high as ever.

“Playing the hardest schedule in the country is something I’m really proud about. I think it’s going to be a very challenging season. Maybe a lot more challenging than 2020. However, I think we’re built to handle some of these adversities. We’re extremely deep… When you return [that many starters], expectations are very high.”

“We want to go 5-0 in the preseason. But the first [major] goal is to win the Trinity League, and our next goal is to win a Southern Section Division 1 championship,” Negro continued.

“Then you usually play De La Salle, based on how the last few years have gone. If you win that then you are in the running to win a mythical national championship, and that’s our final goal. Those [are their] goals every year.”

SANTA MARGARITA: THE EAGLES ARE STILL BUILDING, BUT REBUILDING IS LONG OVER

This past spring, in Anthony Rouzier’s first season as SM’s head coach, the Eagles put out their strongest team since at least 2017, and displayed a strengthened sense of identity both on and off the field.

Their successful abbreviated season, in which they officially climbed well out of the Trinity League cellar, put a clear end to a challenging rebuilding period. Coach Rouz has said since spring that he expects his team to build on that success come game time, but he made clear at media that he still has an eye on overall program development and long-term orientation.

“Our number one goal as coaches is to get invited to our young men’s weddings,” he said. “Getting into their hearts comes first. Our second goal is to make it feel like home. Havng former players come back… is something that’s super important to me. Santa Margarita has had a ton of turnover in the past 10 years… having me here for four years is helping bring back old tradition while having a new school flavor to it.

“Our last goal is to win. We’re trying to do something at a sustained level that’s new to Santa Margarita.”

“I’m not going to make any predictions what our record is going to be,” said Rouzier. “I don’t really care, to be honest. I just want these guys to get better every single day, and continually make our program better… We don’t compromise the culture for anything. We’ll play hard, play for each other, and see where it goes. It’s the best league in America. It’s why I came over here from Germany. Depth is still going to be an issue for us to some degree. We need a few years to keep building.”

MATER DEI: STILL ADAPTING AND ADJUSTING TO THE IMPACTS OF COVID

To be sure, every high school football team out there is still adjusting to how the pandemic shook up the sports world since March of 2020. It happened to be a focal point on Friday for the reigning Trinity League champion and top-ranked team in California – or by some, the country.

To start with, the Monarchs had two COVID-related potential cancellations to their pre-league schedule.

“We got rocked this week,” he said. “We potentially lost Trinity League Showcase opponent Mililani and we lost our opener against Corona Centennial. We may be road warriors to plug in the holes.”

Rollinson also touched on the difficulty Mater Dei experienced without its usual fan involvement and football atmosphere because of the pandemic.

“Last year, our freshman class never had a normal high school day on campus. No classroom, no pep-rally, no dances, no high school atmosphere. That was the missing ingredient. And I missed that too.”

“Our student section is packed at the [Santa Ana Bowl]. That was the missing ingredient last season. Hopefully we can have them back. Seeing the sea of red when we come out of the locker room for the Monarch March. It’s unreal. That’s Friday nights. That’s what we do.”

On the bright side, the legendary coach reaffirmed that he has no plans to step down from running one of the top football programs in the country.

“I’m going to get out in front of it and say I’m going as long as I can go. As long as I’m healthy. I don’t have a cap number of years. I love what I do and I love sitting up here with these young players who energize me.”

JSERRA: EMBRACING THE CHALLENGE OF REBUILDING

With a new head coach, the youngest, least experienced roster in the league, and a winless season only a few months behind them, it’s no secret the Lions are in what many would call a rebuilding phase. New head coach Scott McKnight did not use the term rebuilding, but he made it clear that he knows that there will be major challenges before JSerra is back at an elite level.

“I’m not going to make any excuses about it, but we’re going to be very young, and that comes with its challenges. We’ll be sophomore and junior-laden, and have two freshman [that might start]… We ask them to embrace the opportunity to play and get better.

McKnight, who has long been an assistant coach and special teams coordinator at JSerra under Pat Harlow, added that he’s excited about what he has seen from his future cornerstones so far in practice, both on the field and in terms of character. He also mentioned that Harlow, who’s still a well-renowned offensive line guru and very popular figure amongst JSerra athletics, is still aboard in an assistant/OL coaching role, something the team is excited about.

SERVITE: IT ALWAYS COMES BACK TO BROTHERHOOD

Servite has one of its most talented teams in generations, and many have been looking at the 2021 season as the Friars’ best shot to disrupt the duopolistic status quo in the Trinity League. But instead of diving into ambitious claims or goals for the season, head coach Troy Thomas emphasized his focus on familiar themes surrounding Servite athletics – brotherhood, sacrifice, and culture.

“I’m not going to say one way or the other how we’re gong to do,” began Thomas, “but these guys will represent, and I wouldn’t want to do it with anyone else.”

He’d go on to say that Servite’s biggest goal isn’t a specific record or playoff achievement, but playing and maintaining itself the right way.

“These guys really do sacrifice for each other,” said Thomas. “We practice hard, we lift hard, we study film hard. Parents send kids to Servite to be pushed. The types of families that go to Servite, they want that for their son. We set a high standard, and these guys keep that standard, and prove that guys like ‘this’ can compete.”

By “this”, Thomas was referring to the fact that some of Servite’s best players, especially on defense, are sometimes slightly undersized, less heralded recruits who still compete with and push national championship contenders.

Another topic of discussion at media day amongst numerous teams was “The Asylum” – Servite’s infamously passionate, dedicated student section.

“The Asylum is the best [student section] in the country,” said MLB Jacob Manu. “It comes back to the brotherhood at Servite.”

OLu only won one game in the abbreviated spring season, and now faces fairly significant roster turnover and coaching turnover. However, new head coach Rod Sherman’s main message at media day was that he believes the team he’s taken over is not far from competing in the Trinity League’s upper ranks, and that refining the culture is the key to getting there.

“I saw a team a lot closer than the scoreboard indicated in some of those games,” he said. “It’s not a huge overhaul to get where we want to be.”

“I’ve experienced cultures where it’s ok to be ok. And that’s unacceptable. It’s my job to write the best experience for incredible young men like these four. Championship cultures continue to raise the bar. Every day at practice, we continually raise the bar of what success looks like. It’s our job as coaches to say, tomorrow we can always get a little bit better. To be able to look in the rear view mirror and be pleased, but not satisfied with marginal improvement unless we keep improving.”

While there are numerous pressing questions for the Lancers heading into the season, they have enough senior talent and leadership to rule out any sense of a rebuilding season.

“You can tell the intensity in practices is raised from last year, and we’re all really excited and believe we can compete with these teams,” said QB Logan Gonzalez. “We go into every game thinking we can win. We want to win every single game, and compete at the highest level.”

“We really believe in what we can do if we take things one game at a time, and don’t get complacent,” said CB Brendan Hale.