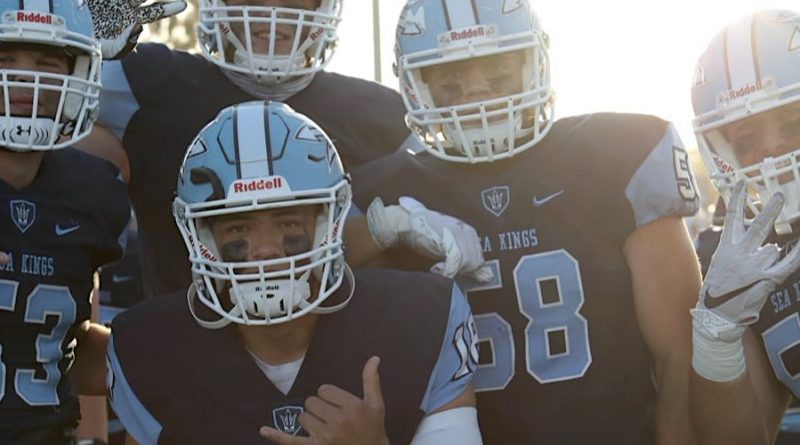 SBLive is previewing the Top 50 high school football teams in California ahead of the fall 2021 season. Here’s an inside look at the Corona del Mar Sea Kings of the CIF Southern Section, the No. 45 team in our countdown.

In the spring, Rasor had to beat out four other talented quarterbacks in camp – all of whom were older than him – to win the starting job. And he held onto the spot by delivering a very promising sophomore season. Rasor threw for 1,035 yards and 15 touchdowns in six games last season, and also ran for three scores. Now, 247Sports has him ranked as a 3-star prospect and top-40 QB in the Class of 2023.

Kubicheck broke out as one of the most productive linebackers in the Sunset League as a sophomore, recording 45 tackles, 4.5 tackles for loss, three sacks, a pick-six, and two forced fumbles.

Sanders proved to be CdM’s top running back last season, running for 438 yards and five touchdowns while also catching for 64 yards and a touchdown.

After getting a lot of fourth quarter reserve minutes on the Sea Kings’ 2019 championship team, Bloom emerged as one of their top defensive players in the spring season. He totaled 33 tackles, seven tackles for loss, and four sacks.

Mannon projects to be one of CdM’s top two-way players after a strong junior season. He caught for 139 yards on offense, and made 28 tackles, six TFLs, three sacks, an interception, a forced fumble, and three QB-hurries.

Salmon recorded eight tackles, four pass break-ups, an interception, and a fumble recovery in the spring. He also emerged as a kick returning threat. He currently has an offer from Maryland.

After losing an outstanding senior class for the second year in a row, this year’s squad is something of a wildcard compared to the past few iterations of Corona del Mar football. But there’s still a very good chance that the Sea Kings are a championship threat in one of the Southern Section’s top divisions. Even without as many nationally-ranked names, there is a promising spread of returning talent balanced well across the field.

This past spring, Rasor and Sanders proved to be the Sea Kings’ QB/RB tandem of the present and the future, and both showed the potential to take it to the next level with full junior seasons. CdM is always filled with deep ranks of big-time athletes, and its coaching staff is renowned for offensive brilliance. So, the fact that they don’t have any returning 150-yard receivers isn’t nearly the concern it would be for most teams, and John Tipton, Charlie Mannon, and Cooper Hoch are all strong prospects to break out as big-time deep threats.

Defensively, CdM is returning one of the best linebacker cores in the county, led by Kubicheck, Bloom, and Mannon, and also expects big things at LB from Brady Sarkisian and Christian Brooks. That’s a versatile group that can bring both some serious boom at the line of scrimmage and also strong coverage. With Wood and Salmons leading the defensive line and secondary, respectively, the Sea Kings should once again have one of the most consistent defenses around.

Corona Del Mar will need some new faces to step up as major impact players in order to be in the mix for a Division 1 playoff spot or Division 2 title, but the foundation, experience, and championship pedigree is clearly there.

With a significant amount of youth and first-time cornerstones in the mix there is the potential for growing pains. The Sea Kings once again play a very challenging pre-league schedule, and this year brings one of the deepest Sunset League gauntlets ever. So, making one of the top two divisions for the CIFSS playoffs is far from a guarantee. Still, they’re are a safe bet to be a dangerous, robust team that brings its best come playoff time regardless of what division they’re in.

“A few of our main goals are to keep our players healthy for a long season and to win as many games as we can. We have goals to make it far into the playoffs and I believe we’ll be able to do that this year as a team. On and off the field we all identify as a family. We all have each other’s backs and have built a really strong brotherhood with every single player on the team.”