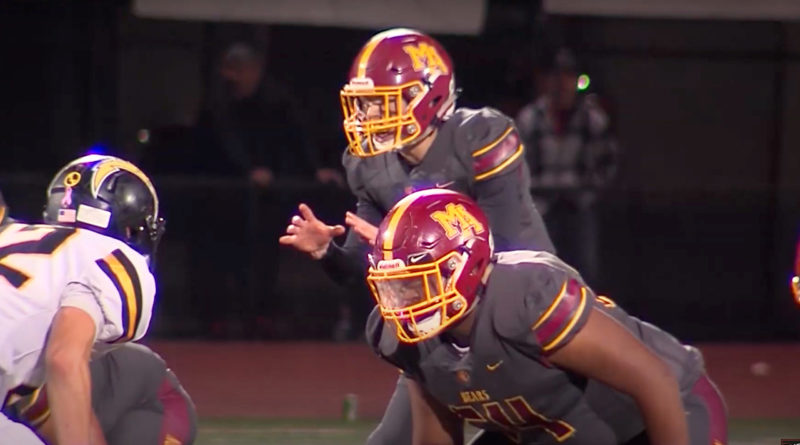 SBLive is previewing the Top 50 high school football teams in California ahead of the fall 2021 season. Here’s an inside look at the Menlo-Atherton Bears of the CIF Central Coast Section, the No. 49 team in our countdown.

Last season as a second-year starter, MacLeod took the leap many expected, going from a very good signal caller to one of the Bay Area’s premier 2022 QBs. In five games against a competitive Peninsula-Bay gauntlet, he threw for 890 yards and eight touchdowns on over 70% completion. And he did it without throwing one pick, leaving him with an otherworldly passer rating of 152.2, while also upping his game as a runner. All signs point to a huge senior season for the potential D-1 prospect.

Coach Saunders: “His biggest strength is, not only all the physical talent, but what he brings regarding his knowledge and his decision-making. That’s what makes him special now, and will make him a great college quarterback. He was out of the game before halftime in two of our five games, and only even stepped foot on the field in 14 or 15 quarters at most of our 20 … He didn’t make wrong decisions, and when he did, it was a small one that didn’t hurt us. He’s so dedicated to watching film, and is great at knowing where he’s going with the ball because of all the time he puts in even outside of practice.”

Moss is a 3-star WR with 10 offers including Arizona State, Oregon, Nebraska, and Fresno State. Last season, he caught for 319 yards and three touchdowns, and had 156 returning yards special teams. Moss enters his senior season on a short list of the top wideouts in the region.

While he’s a receiver by trade, he was also an impact contributor at safety, and Saunders said he’ll likely be asked to do even more on the defensive side this year.

Coach Saunders: “That’s kind of our approach – we play guys we need to play in spots they need to play, and don’t overthink it.”

A 3-star prospect with an offer from Arizona State, Taufui ran for 159 yards and four touchdowns last season plus 21 yards receiving. If he stays healthy, expect him to take his per-game production to another level.

Coach Saunders: “He got a little banged up in game three last year. That lingered and really impacted his truncated season. He’s the most complete running back I think I’ve coached. Between his running ability, plus in the pass-game and as a blocker on top of as a runner.

In just four games as a junior, Earby blew up as one of the top prospects in the Central Coast Section. He caught for 244 yards and four touchdowns in four games as a featured receiving threat, but his main position is in the defensive backfield. Earby made two interceptions in the spring and is now a 3-star prospect with 10 offers, including Cal, Oregon State, and Fresno State.

Coach Saunders: He certainly had a breakout year for us. He grew, physically, athletically, and also in terms of maturity. He’s dominant, without a doubt a Division 1 defensive back. He’s so confident in everything he does, he can play anybody anywhere on any part of the field man-to-man, and we have all the confidence in the world in him. We expect a lot more moving forward. He’s gonna be hard to take off the field.”

Buck was the Bears’ leading tackler last season, finishing with 33 tackles, five tackles for loss, and a sack. He also had over 100 receiving yards at tight end.

Coach Saunders: “He’s just instinctive, he’s got a nose for the ball, at times one of those guys you don’t have to teach. Not the biggest kid on the field, but he plays like he is. I’ve never seen him hesitate or guess, he reads it and he goes. He’s another guy who could play at the Division 1 level… he’s a hair undersized but we are pretty optimistic that he’ll land in the correct spot. He averaged one catch a game, and it was always a clutch catch. He might not start the season playing both ways, but as the offensive coordinator, it’ll be hard to keep him on the sidelines.”

Playing a lot of CB and also showing some promise as a receiver, Price recorded 37 receiving yards, 14 tackles, and one interception as a sophomore. M-A is expecting big things from him particularly in the defensive backfield, but also at WR.

Coach Saunders: “Johno is a long, basketball-type corner/receiver. You can just see the confidence growing and building. He’s primed for a big junior year, probably [as a rotation CB] but he could start at safety.”

One of M-A’s top unheralded breakout players last season, Barbie caught for 170 yards and two touchdowns, and also made 10 tackles, one pick, and one forced fumble. On top of that, he’s also the team’s top punter, and a PR/KR threat. In addition to starting at WR, Saunders said he might not start on defense, but he’ll certainly be a big factor for the back four either way.

Coach Saunders: “He might be the most explosive, springy athlete that I’ve ever coached. Watching him in the long jump and triple jump in track is something. He’s very hard to tackle. Savvy, elusive, and strong. Gifts you can’t teach.”

At 6-2, 315, Ngalu will be a second-year starter at guard and the anchor of the Bears’ O-line. He’ll be a fixture in the defensive line as well.

An emerging senior lineman Saunders is high on, Faasolo will be M-A’s go-to offensive tackle. He’s a unique athletic specimen at 6-9, 255, with very good mobility for his size. While he probably won’t start on defense, Faasolo is likely to see significant reps as an outside defensive lineman.

Without any question, Menlo-Atherton enters the season as one of the top contenders for a CIFCCS Division 1 championship, and the heavy favorite to repeat as league champion. Serra (San Mateo) and Valley Christian are widely considered the frontrunners to return to the section finals, but M-A’s title hopes are legitimate, even if they are an underdog to the status quo. The Bears don’t have a very deep list of returning impact players, but most Central Coast Section heavyweights don’t this year, and the senior core M-A does have is talented and battle-tested enough to make them a clear threat to compete for a title.

On the field, the Bears will run a lot of the schemes they had success with in Saunders’ first season there. On offense, that will include a significant dose of run-pass option, and on defense they often employ a 3-4 defensive front with two inside backers. That said, Saunders isn’t afraid to adjust game plans substantially mid-game, and said that coming ready to vary looks and execute counter-schemes is something they prepare for heavily on any given week.

In order to compete for a title, M-A will not only need quite a few players without playoff experience to simply hold it down against the best competition every game. The Bears will need some first-time starters to have full-on breakout campaigns, especially in the trenches. But Saunders is confident that they have a wealth of guys who can potentially fit the bill. If that happens and they’re healthy come playoff time, M-A has a good chance to deliver a wire-to-wire dominant season, with an unbeaten regular season and title run legitimately plausible.

Menlo-Atherton being anything less than in the mix for a serious playoff run is unlikely. With only a few established top-flight playmakers and numerous two-way lynchpins, the Bears don’t have a lot of padding if there are untimely injuries. Otherwise, this team’s floor is higher than the ceilings of most other Division 1 playoff hopefuls.

“Our goal is that we want to compete from the get-go at the highest level of championship play. That also means being prepared every single week, and not getting ahead of ourselves at any point in time.”

“We’ve had six weeks of heavily lifting so that we’re already in a routine heading into the season. Heading into last season, it was still a lot of adjusting… last year’s seniors had three head coaches in their time there. Now, I feel very confident in the cohesion and commitment of our kids. We all know what we’re capable of physically, in terms of our speed, athleticism, size. And we know what we’re capable of as a unit.

“Our league top to bottom is very strong. There’s great consistency, great competitiveness, and definitely rivalries within the league too, which is a good thing. Our biggest rivalry is King’s Academy, but Sacred Heart Prep being across town and El Camino [Real] from us, they’re a rival, and they’ve given us some of our more competitive games over the last couple years. Our league is graduating some really good players. It’ll be interesting to see how everyone responds to losing key talent.”

“We have a difficult preseason with some teams we haven’t seen before… I’m looking forward to having some adversity as a program, and working through it and pushing through together. We’ve taken on a blue collar approach. We’ve now been lifting outside for over a year, which means taking all our stuff out and putting it all back after working out every day. Our guys have totally bought in. We’ve grown a lot in this particular offseason.”