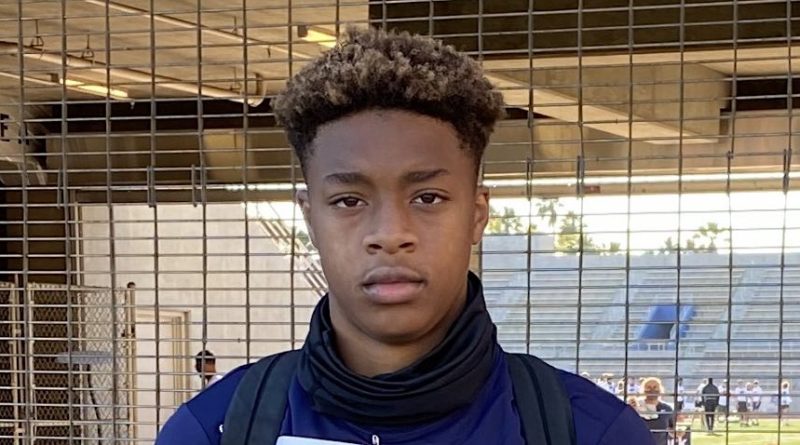 SBLive is previewing the Top 50 high school football teams in California ahead of the fall 2021 season. Here’s an inside look at the Oxnard Tritons of the CIF Southern Section, the No. 48 team in our countdown.

Coach Moon: “He’s such a huge part of what we do. He’s just a great kid in addition to being one of the top defensive players in the country.”

Offer sheet: He had 16 scholarship offers before committing to UCLA in early August.

Coach Moon: “Donald was one of the best offensive lineman from our area in the spring. He’s a dominant player. He’ll play a little bit of defense for us too, but he’s the anchor to our offensive line.”

Coach Moon: “Niko is the leader of our defense. He’s a dominant player on both sides of the ball. He was a little banged up last year but was a key contributor in some of our close games.”

Coach Moon: “You’ll hear Jordan’s name a lot in the next six months with college coaches and stuff like that. He was our offensive MVP in the spring but his future at the next level is on defense. He’s going to be a force for us.”

Coach Moon: “Antoine is a very disruptive player. He’s a plug for us. We run a 3-3-5 defense, so without a good nose, we’re not a very good defense. He had a phenomenal year last year.”

Coach Moon: “Dayday is a special athlete. He was our fifth quarterback last season and he helped us win the league championship.”

2021 spring stats: Completed 6 of 9 passes for 84 yards and a TD, Made 16 tackles and had an interception on defense.

Coach Moon: “Josh is going to be a Division 1 kid.”

Coach Moon: “Philip is going to be one hell of a high school running back.”

2021 spring stats: Had 20 carries for 98 yards and one TD. Caught four passes, made six tackles and blocked a field goal.

2021 spring stats:: Made 11 catches for 244 yards and three TDs. Also made seven tackles and had two INTs

Coach Moon: “Tommy made a lot of plays for us last year.”

Coach Moon: “Gabriel is one of four returning offensive linemen.”

Coach Moon: “Matt is one of four returning offensive linemen.”

Coach Moon: “Junior will move back to DB even though he helped us win a league title at QB a year ago.”

2021 spring stats: Completed 35 of 76 passes and threw three TDs, rushed for a TD and also made two tackles on defense

There will be a freshman quarterbacking Pacifica this season, the question is which one? The two players competing are 5-foot-10, 150 pound Tagg Harrison and 5-foot-6, 150 pound Dominic Duran, the brother of Sierra Canyon senior quarterback Daniel Duran.

Pacifica has a tough schedule facing off against St. Bonaventure, West Ranch and Simi Valley in the non-league. On paper, the Tritons could win every game on their schedule, but since they’re so young, dropping a couple to non-league foes or losing a league game to Oxnard or Ventura is definitely possible.

The best case scenario is 9-1 and a solid playoff seed in a tough division. Mike Moon has shown he’s one of the top coaches in the region and he has enough talent to have a good year. The QB will be young, but the Tritons went 5-0 using five QB’s last year — they can overcome a first year quarterback’s potential mistakes.

A 7-3 record. Moon is nervous about the non-league part of the schedule due to having a freshman QB and a lot of sophomores, but he thinks this can be a group that gets better every week and goes on a playoff run. In Moon’s eyes, a state championship type of team is most likely a year or two away.

“Our offensive line is a huge strength along with our secondary. We’re returning our entire secondary. I really like our running game as well. We have a strong backfield. The question marks are the quarterback and our slot receivers.

We’ll have some developing to do early, but I really think we’re going to be a really good football team by the end of the year. We’ll be playing a lot of young guys, but that doesn’t mean we can’t be good. We may struggle early, but we’re going to learn.

My goal is to win a league championship and then obviously try and win a ring, but if we don’t, I’d like to lay the groundwork for a championship in the next couple of years. This year though, we’re going to be tough to beat.”