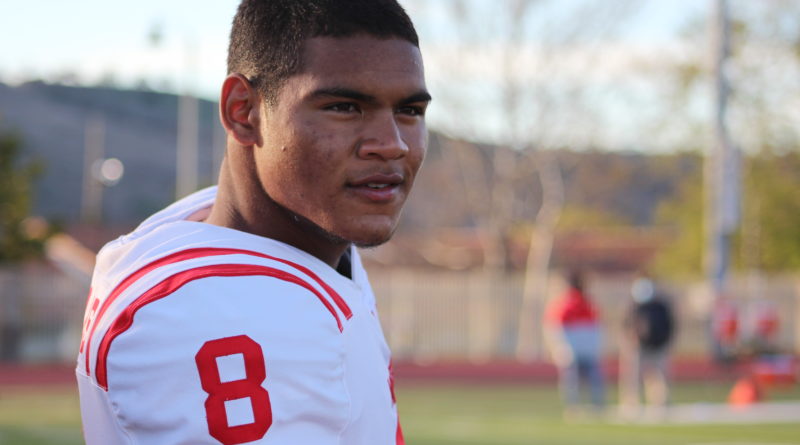 First up: our preseason 2021 all-state team.

We evaluated players in every Section of the state to compile a roster of the 26 best players in California — 11 on offense, 11 on defense and four on special teams.

Nelson had about as dominant a spring season as possible. He completed 73% of his passes for 1,513 yards and 23 TDs. Los Alamitos went 6-0 and Nelson was named the Gatorade state player of the year.

Mahasin finished the spring season with 10 touchdowns and 745 total yards in five games. He can lineup in the backfield or at receiver. Mahasin was named the Bay Area News Group football player of year in May.

Luke is one of the most electrifying running backs in the country. In five games last spring, he had 21 carries for 332 yards (which was good for a whopping 15.8 yards per carry) and five TDs. Luke also made nine catches for 109 yards and a score.

Williams was a red zone weapon in the spring. In five games he made 16 catches, with five coming for touchdowns. He’s set to commit to a college program on August 8th — 247Sports.com has Notre Dame as the favorite to land the receiver.

Uiagalelei was dominant at both tight end and defensive end in the spring, but he gets the nod at TE thanks to catching touchdowns against Servite and Mater Dei.

Swanson, a 6-foot-6, 310-pound senior, is committed to Stanford. The Trailblazers will have one of the top o-lines in the state this fall.

Wooten, who plays left tackle for Sierra Canyon, is committed to Oregon. The Trailblazers have one of the best offensive lines in the country.

No offensive lineman in the state has had a bigger offseason than Yoon. In the span of a few months, he’s received scholarship offers from USC, UCLA, Cal and Colorado.

Tolo has been a starter on Mater Dei’s offensive line since his freshman season. In the spring, he was named to the All-Trinity League second team.

No one knew Kanu’s name before the spring season started and now he’s on the radar of nearly every college team in the country after making 28 tackles for an Eagles team that impressed.

Moi was the best player on San Diego’s best line in the spring. He’s committed to Cal.

Burrell is committed to Cal. As a sophomore, Burrell made one of the game clinching plays in the Braves’ Southern Section championship win when he intercepted then-Mater Dei QB Bryce Young.

Bailey is one of the best linebacker prospects in the nation. When he plays, he’s a game changer, but he’s struggled to stay on the field at times due to injuries. In the spring, he played in only two games but made the most out of them recording 13 tackles, four sacks and a forced fumble.

Edwards is one of the top players nationally in the 2023 class. He’s received scholarship offers from Notre Dame, Oregon and USC, among others.

Hunter had two interceptions in the spring and was named the Trinity League Defensive Player of the Year. He’s a key piece for the best defensive backfield in the state.

Jackson is committed to USC. His interception against St. John Bosco in the spring clinched a victory for the Monarchs. Jackson is also a great sprinter. He tied the state record in the 100 meters this spring with a time of 10.25 seconds.

Berry, a two-way star for De La Salle, is committed to Arizona. He’s one of the top high school football players in Northern California.

Ramsey has been a three-year contributor for Sierra Canyon. He’ll lead the Trailblazers defense this fall.

Tucker has narrowed his college choices down to Florida State, Oregon and Washington. In the spring, he caught two TDs on offense for Lincoln in addition to locking down receivers at corner on defense.

Lemon is a dominant receiver and defensive back and also a stud in the return game. In the spring, he returned a punt for a score. He has incredible speed.

Meyer made four field goals in the spring. His long came from 42 yards yards out. He also was a perfect 27/27 on PATS and had 23 touchbacks on kickoffs.

Barry is one of the top punters in the nation.

Chesney is committed to Air Force. He’s one of the top long snappers in the country. Chesney also plays linebacker for Aliso Niguel and he will be playing in the All-American Bowl on NBC.