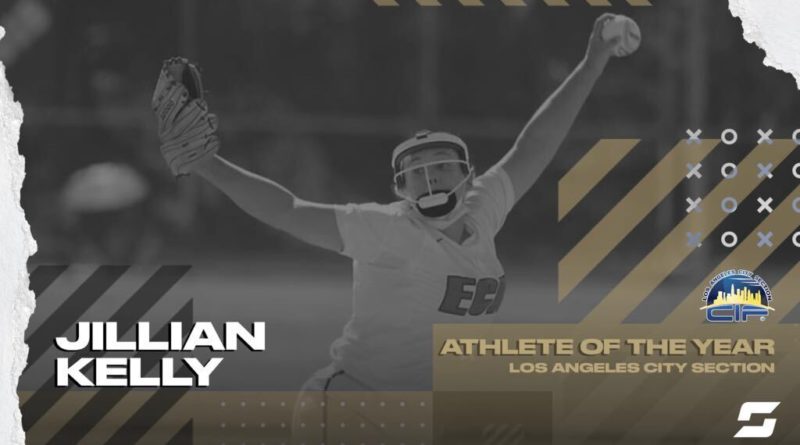 Entering her senior season, it was no secret that Jillian Kelly was a candidate to be the top softball pitcher in the Los Angeles City Section.

As a sophomore in the 2019 spring season, she was already one of the section’s best. Kelly helped lead El Camino Real to an Open Division title, posting a sub-1.00 ERA, and was named First Team All-City. The 2020 season was canceled due to the pandemic, but when softball resumed earlier this year, nobody was surprised to see the Chapman University commit pick up where she had left off.

“We were so prepared for my junior season,” said Kelly. “We’d only lost two players from the previous championship team. So when that season got taken away from us, we just got hungrier and hungrier to have a season and win another ring.”

And from the very start of her senior campaign, Kelly’s hunger translated into performance that frequently blurred the lines between dominance and outright perfection.

ECR started the season off against Chaminade. A traditionally strong program, the Eagles beat the Conquistadors in 2019, and gave Kelly perhaps the toughest night of her high school career early in the 2020 season before it was canceled. In it, the Eagles scored four earned runs in one inning against Kelly, but ECR pulled out the victory.

So it was only fitting that Kelly kicked off the season by throwing a no-hitter against ‘Nade – a feat that would eventually become just a footnote on her season.

From pre-league play through the City Section playoffs, Kelly went 13-2 with an ERA of 0.81, and pitched almost every single inning for ECR all season – 119.2 innings out of 125.2. When the playoffs rolled around, she was as dominant as it gets, pitching every inning of ECR’s postseason without allowing a single run. Kelly started the playoffs with a no-hitter against Legacy, pitched a complete-game shutout against Carson, and threw a perfect game in the title game to rout Granada Hills Charter 10-0 for an Open Division championship.

ECR lost 4-1 in the CIF Southern Region Division 1 quarterfinals against eventual SoCal champion Camarillo, but Kelly still finished the season 13-3, with two of her three losses coming against the Scorpions. She ended her senior season with an ERA of 0.99 and a career record of 30-7. Opponents only hit .160 against her in 2021, and her mark of 172 strikeouts to 19 walks gave her a K/BB ratio above 9:1, all culminating in a WHIP of just 0.73.

Despite playing an enormous role on CIFLACS softball’s biggest stage, the moment never got to Kelly.

“Since we had such strong a strong team, it never went through my head that if [I don’t pitch] well, we’ll lose,” said Kelly. “My defense, my catcher Abigail [Miller] … they’re always amazing and there’s constant support. So there was never any pressure.”

“Most of the team has known each other since we were four or five playing in rec ball together,” she said. “We are very competitive obviously, but we have a great community and we work really hard together. Something I really admire about our program is that we don’t have team captains, so nobody is overruling each other or pointing fingers.”

Although she was a bona fide Division I prospect, Kelly has no doubt that choosing to play NCAA D-3 softball at Chapman was the right call for her.

“A big part of sports is aiming for D-I and only D-I. A lot of people were shocked when I decided to go to D-3, but it was a no-brainer for me because I really wanted to focus on academics. Some people really look down on going D-3, but D-I isn’t a good fit for everybody just because it’s [more prestigious].”

“We will always remember she was a two-time City champ, City Player of the Year, all-area pitcher of the year, West Valley League pitcher of the year, etc., but this will not define her. She is well respected by her teammates. She is a leader on and off the field. She excels in the classroom. She is everything a coach could ask for.”

“I’m going to miss the coaching,” said Kelly. “Coach Borenstein and Coach Blumfield will forever be my favorite coaches.”

*Note: El Camino Real changed its mascot from the Conquistadors to the Royals at the end of the 2020-21 school year.