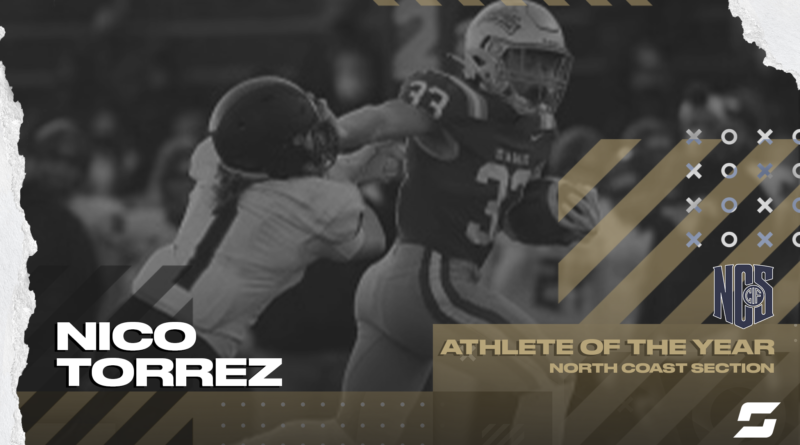 Brentwood, California native Nico Torrez made the decision to commute nearly an hour each way to De La Salle (Concord) for high school for a pretty simple reason.

“I wanted to go there because, well, they win. A lot. I’m a competitive guy … I just don’t like to lose,” Torrez said.

Winning is something Torrez spent the last two years doing a lot of at De La Salle.

As a junior in the fall of 2019, he was a factor at running back on the Spartans’ CIF North Coast Section Division 1 championship team. He ran the ball 54 times for 356 yards and four touchdowns to go with five catches for 74 yards and two more touchdowns for the 12-2 Spartans, a consensus Top 20 team in the country.

But Torrez was far from showing what he could really do. Even though he was able to crack the Spartans’ rotation, a torn labrum he had two surgeries on held him back physically, and he played that season through a litany of shoulder dislocations.

“Any time someone would hit me, or I’d put my hand on one of my linemen in the box, my shoulder would come out,” said Torrez. “It was kind of a mess.”

The following spring, De La Salle only got in five baseball games before baseball season was canceled. And because of his labrum, Torrez spent the little time he had before spring sports were canceled in a cast.

Without having a plan for college locked in, Torrez was hoping he would get a chance to show what he could do during his senior season. With a football season looking unlikely, he almost opted to just focus on baseball.

“In the beginning of the year, I wasn’t even going to play,” he said. “I lost hope.”

But when the football season finally materialized, Torrez was ready to dominate from the jump. In De La Salle’s season opener, he ran for 142 yards and two touchdowns on just seven carries to lead the Spartans past St. Mary’s (Stockton) in a 35-27 nail-biter. The victory narrowly preserved De La Salle’s well-renowned winning streak of well over 300 games against Northern California foes.

“The streak” is something the program has long said it not only doesn’t care about, but doesn’t even discuss. Still, his efforts were pivotal in keeping it alive.

In six games as a senior, all wins, Torrez established himself as the most statistically dominant offensive threat on the best team in NorCal. He had 57 carries for 651 yards and 10 touchdowns, good for an outstanding mark of 11.4 yards per carry, and finished with 700 yards of total offense.

Once football season was over, Torrez faced another challenge in cracking the starting lineup in baseball. That was the result of having missed his entire junior season, plus the first few weeks of his senior season due to the condensed sports schedule. But he would quickly prove to be one of the better players on arguably the top team in the section. In 19 games, Torrez drove in 15 runs, posted a strong line of .326 BA/ .396 OBP/ .478 SLG/ .874 OPS, and didn’t make a single error in centerfield.

Had the 2020-21 school year included CIFNCS playoffs like any other season without a pandemic, there’s a good chance that Torrez would have won section championships in both football and baseball. Still, his spring efforts solidified him as a college baseball player, and he recently committed to play centerfield at Los Medanos College – and is already working out with the team four times a week.

In addition to winning at a high level, Torrez will never forget the influence going to De La Salle had on him.

“I went there to be a better man, person, and athlete,” said Torrez. “That’s what it’s all about … the fact that we kept showing up to football workouts when we thought there wouldn’t be a season … it’s cliche, but how hard we work as a unit, all in it together, it’s really what it means to be a Spartan. It sets an example for the juniors, and it’s our duty at De La Salle, in respect for those that came before us.”

Next step: Torrez plans to play baseball at Los Medanos College starting in fall of 2021.