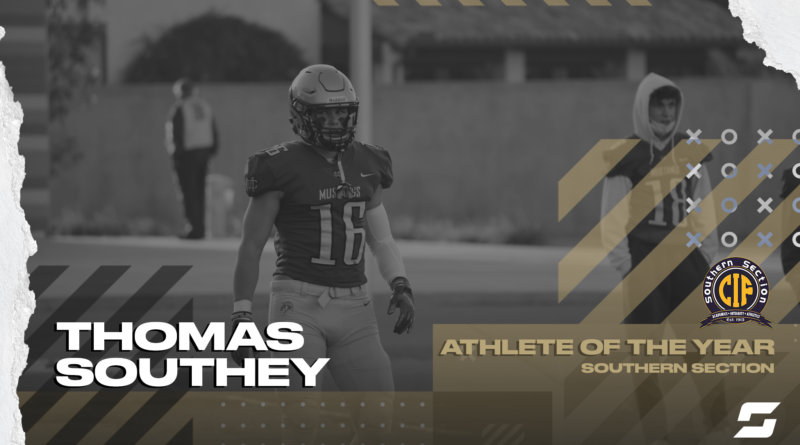 Thomas Southey came into his senior football season with a handful of Division II and III offers, and one large chip on his shoulder. Mira Costa’s top receiving threat from the 2019 season knew he was capable of taking another major leap, and his absence of looks at the D-I level gave him added motivation.

Yet, practicing football in January and February confined to small groups with masks and no pads, he often wondered if they were going to have a season.

Finally, the announcement came out that high school sports would resume in California, and Southey would go on to jam-pack an exceptional three-sport year into the span of under four months.

Only a couple of weeks after football was clear to resume, he came out of the gate playing better than ever. Southey turned heads with a 204-yard, four-touchdown performance in the Mustangs’ first game of the season. He was the rock of a strong, otherwise very young offense, and finished with 579 yards and 12 touchdowns receiving in six games – in addition to handling all of Mira Costa’s kicking and punting duties. In the very competitive Bay League, The Mustangs averaged nearly 32 points per game and finished with a winning record. For his efforts, the Daily Breeze named Southey the area’s Offensive Player of the Year in football.

“It’s still crazy to me how fast it turned around from when it looked like there’d be no season,” said Southey. “The key for us was, we were just so happy to be out there playing. Relaxing, because you have to make the most of a six-game season. Everyone came together and bought in, and realized we should just have fun with it. I think we shocked people from week one.”

“With only six games, I knew I had to get good film, and that helped me play the way I did,” he said. “I was always thinking, what am I going to do this game that’ll show [D-1 schools] I can play at that level?”

Now, Southey is positioned to play D-I football after all. He currently plans to play football at SMU starting as a spring enrollee in 2022, an option he picked over a preferred walk-on offer for the upcoming fall season.

However, football season was just the start of Southey’s exceptional senior year of athletics. He would go on to help lead the soccer team to an 18-1-3 season that ended with Southern Section Division 1 and CIF SoCal Southern Region Division 1 championships. And he did it at the same time that he was notching 20 goals and 10 assists in nine games in lacrosse.

One of Southey’s top soccer goals of the season came around the 60th minute of the CIF-SS quarterfinals, in which Mira Costa upset Cathedral, the top-ranked team in the country. His goal put them up 2-0, and they’d go on to win 2-1.

“It was crazy … it was one of the best feelings of my life.”

After the dust settled, Southey had earned first team all-league honors in three sports between March and June.

“I thought I’d have to choose between lacrosse and soccer even when they announced there was a season,” said Southey. “It went more smoothly than I expected. Both coaches were really understanding.”

Soccer practices went from 3 to 5 p.m., and lacrosse practiced followed from 6 to 8 p.m. Southey didn’t mind the long days.

“When we played Redondo in soccer for the Bay League championship, I saw my lacrosse team warming up [nearby] at the same time. After the game I just switched uniforms.”

Next step: Southey plans to play football at Southern Methodist University starting as a spring enrollee in 2022.