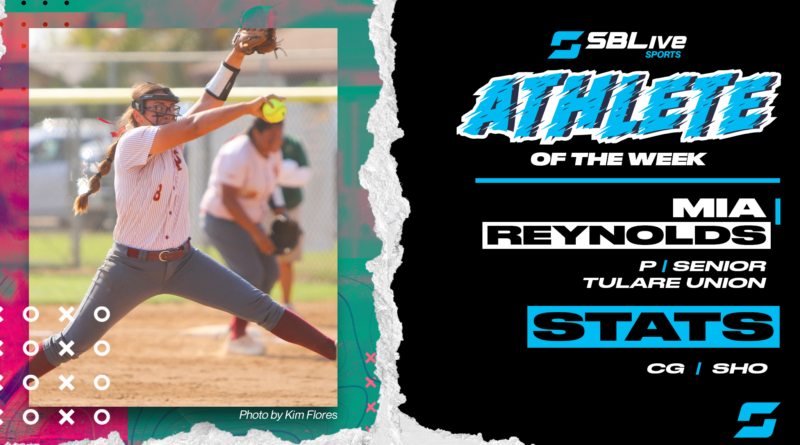 The senior threw a complete game shutout to beat Liberty (Madera) for a CIFCS Division 3 title.

Reynolds received 63.15% of the vote, beating out Clovis North’s Ryan Maddox who finished second with 35.81%.

Roxanne Guera, Mission Prep softball: In both the semifinals and finals for Central Coast Section Division 6, Guera threw a one-hitter and complete game shutout with 12 strikeouts. She also went a combined 2-7 with a home run and two RBIs.

Briana Solis, Highland softball: Solis threw complete game shutouts in both the semifinals and finals for Division 5 in the Central Section, and also went 3-7 with a walk.

Erica Flores, Dinuba softball: Flores threw seven innings and allowed just one earned run in a win over Tulare Western in the CIFCS Division 2 semifinals, and also went 2-3 with a home run, a double, and two RBIs. Then she was part of a shutout effort in the circle in Dinuba’s championship victory against Selma, in which Faith Hernandez’ two-run blast provided the game’s only runs.

Ryan Maddox, Clovis North softball: In the Broncos’ 6-3 victory against Clovis for the Central Section Division 1 title, Maddox went 3-4 with a homer and a double, and also got the win in the circle.

JP Boyle, Sequoia baseball: Boyle helped lead Sequoia to a CIFCCS Division 2 title smashing home runs in both the semifinals and finals. In total for the week, he went 4-6 with three walks, five RBIs, and four runs.

Nate Palacioz, Madera baseball: Palacioz threw a two-hitter and allowed just one run in seven innings to lift the Coyotes over Arroyo Grande for a Central Section Division 2 title.

Mark Hu, Harker baseball: In the CIFCCS Division 6 semifinals, Hu threw six innings with just two runs allowed for a win. Then he went off in the championship game, a 16-15 barn-burner over Stevenson, batting 4-5 with a homer and four RBIs, coming around to score all four times.

Jacob Godwin, Gilroy baseball: Godwin went 3-5 with a homer, a triple, three RBIs, and the game-winning run to lead Gilroy over Pacific Grove in the 10th inning for a CIFCCS Division 5 title.

Adam Salazar, Ridgeview baseball: Salazar went 3-3 with a walk and two RBIs to lift Ridgeview over Kerman in the CIFCS Division 3 finals.

Dexter Quisol, Burlingame baseball: In the last two rounds of the CIFCCS Division 3 playoffs, went 4-8 with two doubles, three RBIs, three runs, and a stolen base to help Burlingame to a championship.

Aaron Parker, Los Altos baseball: While Los Altos came up short against Burlingame in the finals, Parker went a combined 6-7 with two home runs, a triple, and seven RBIs in the semifinals and finals.