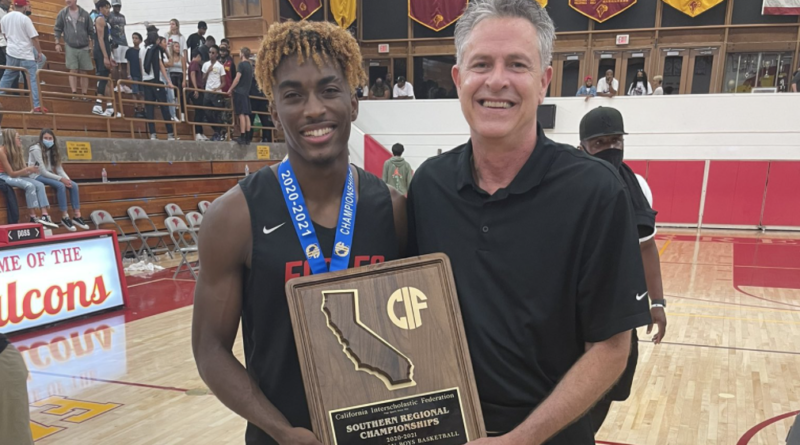 “I don’t know how many wins I have, but I have 202 losses,” he said in a recent phone call. “The losses kill you. You take it personally. You feel them. Every single one of them.”

In March of 2020 Kleckner experienced one of the worst defeats of his career, a 63-61 loss to Sierra Canyon in the Open Division CIF State regional championship game.

With three minutes to play, Etiwanda led by 11. The Eagles didn’t score again and lost on a Ziaire Williams buzzer-beater.

“That took a lot out of me,” Kleckner admitted. “That was the last thing we all tasted before COVID hit and we sat on that for a year.”

More than 13 months later, Etiwanda played its first game of the 2021 spring high school basketball season against league rival Damien. The Spartans had been playing games for nearly a month and were 15-0. Etiwanda hadn’t practiced in 10 days due to a COVID-19 pause.

“I was agonizing over that game for months,” Kleckner said.

Despite the lack of practice, Etiwanda won 64-60. Two weeks later the two teams met again and Etiwanda won 56-53 on a Darvelle Wyatt three-pointer at the buzzer. That second win pushed Etiwanda to 6-0. It was becoming clear that the Eagles had the potential to have a special season.

Etiwanda finished the regular season 9-1 and qualified for the CIF Southern Section Open Division playoffs. In their third pool play game, the Eagles met a familiar foe: Sierra Canyon. Both teams were 2-0 in the pool so the game was essentially a semifinal.

With 1:53 to play in the game, Etiwanda clung to a one-point lead, but once again they couldn’t close the game out and eventually lost 82-76.

“Knowing that we gave the game away because we couldn’t make free throws, that one hurt,” Kleckner said.

Even though Etiwanda lost, the Eagles traveled to Chatsworth again 13 days later for a CIF State Open Division regional semifinal. For Kleckner and seniors Jahmai Mashack, Marcuss Green and Wyatt, this was their last chance to beat the Trailblazers after all of the pain Sierra Canyon had inflicted on them over the course of the last two seasons.

And this time they came through. Etiwanda shot better from the free throw line and won 82-76.

“Our kids competed and played really hard,” Kleckner said following the win. “That was just like last time and that’s why I told them in my pregame speech, ‘guys, let’s just go out and do what we did last time, but let’s do it better.’”

Following the victory, Kleckner and Etiwanda still had one more hurdle to jump. In the opposite semifinal, undefeated Torrey Pines beat Damien which meant Etiwanda had to travel to San Diego for the title game. Heading into the game, Kleckner was 0-5 all-time in CIF State regional championships.

The Eagles jumped out to a 44-27 halftime lead in the game, but Torrey Pines fought back and in the fourth quarter trailed by three in the final seconds with the ball. Coming out of a time out, Torrey Pines wasn’t able to get a shot off and Etiwanda won 68-65.

After 25 years, Kleckner had won his first regional title.

“That one did feel good,” Kleckner said. “It was like, ‘finally.’ Finally we can enjoy this … For a coach, it was like getting that monkey off my back, like ‘are you kidding me?’ We’d come so close.”

This season was the shortest Kleckner has ever had at Etiwanda with his team only playing 16 games, but it will surely be one of his most memorable. For once, Kleckner is ending a high school basketball season relieved instead of frustrated.