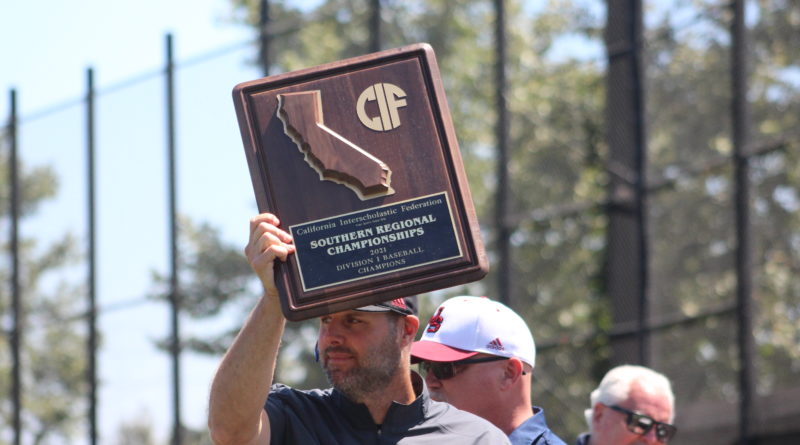 He was sad — sad he wouldn’t be able to coach his seniors anymore.

“It’s bittersweet,” he said with tears in his eyes. “It’s a pretty special group.”

JSerra has four seniors committed to UCLA, one to Arkansas and another to Washington and they all played big roles in Saturday’s championship.

UCLA commit Eric Silva threw a complete game and struck out 11. Arkansas commit Gabe D’Arcy had three RBI’s in the game — two of them scored UCLA commits Cody Schrier and Gage Jump. Luke Jewett, another senior UCLA commit, hit a solo home run. Defensively, Washington commit Colin Blanchard had a clean game behind the plate, as he’s done for the majority of the season.

“I can probably say this is the best team that I’ve had in my 15 years here,” Kay said.

The Lions talent is obvious, but for Kay he won’t only miss the complete games and home runs.

“They’re really a good group of kids,” Kay said. “They were raised right. I’m lucky I got to coach them…This team made me a better person and a better coach.”

JSerra’s ultimate goal in 2021 was to win a Southern Section championship. The Lions came up just short of that losing in the Division 1 title game to Harvard-Westlake 3-0 last week. Despite the loss, JSerra qualified for the regional playoffs and won three games to go out as regional champs.

“We won the last game of the season,” Kay said. “We got to play longer than really anybody else. It’s a dedication to not only this year’s senior class, but last year’s too.”