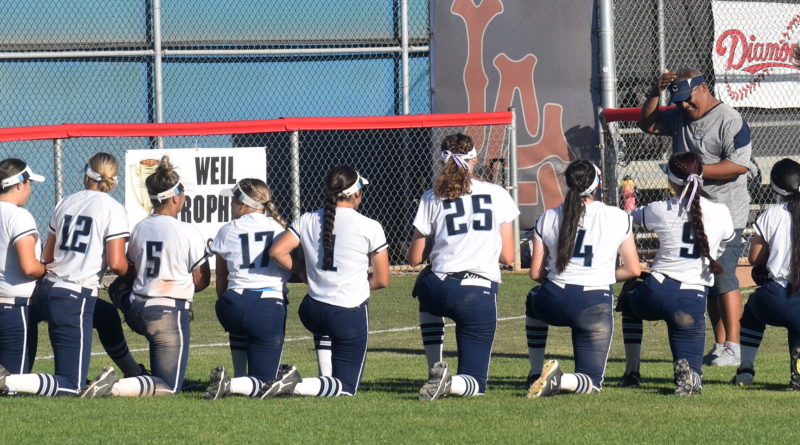 LOS ALAMITOS, Calif. – Behind an excellent outing by Ainsley Berlingeri and a pair of runs in the sixth inning, No. 5 Camarillo defeated No. 1 Los Alamitos 2-1 in the CIF Southern Region Division 1 semifinals on Thursday.

Both squads did their only scoring in the span of an inning. Los Al broke the deadlock in the bottom of the fifth inning when Taylor Johnson, who reached base after getting hit in the shoulder, came around to score on a double from Jazzy Santos.

Camarillo responded with a mini-rally in the top of the sixth that proved to be enough to seal the deal. Rylee Pinedo walked, got to second on a fielder’s choice, and made it home safely on a single by Hannah Glad. The Griffins opted to intentionally walk Krysta Lucas, who had smacked a double earlier in the game. Justice Flores got the bases loaded on an infield single, and Glad scored before the inning was through on an error.

The game was a true pitching duel between two sophomores: Berlingeri, a 6-1 flamethrower who pounded the zone relentlessly, and the Griffins’ Berkley Vance, who kept batters off-balance with a particularly heavy dose of off-speed. Berlingeri held Los Al to four hits and one walk, and also hit two batters. Despite the loss, Vance finished with a three-hitter, although she did allow four walks (not including the intentional walk).

Bella Fortini made a pair of highlight catches in left field for the Scorpions. The first was a nice diving catch in the middle innings, and the second one came on the run in the bottom of the sixth inning, preventing an extra-base hit with a runner on first.

Camarillo moves on to face fellow Ventura County powerhouse No. 6 Westlake in the Division 1 championship.