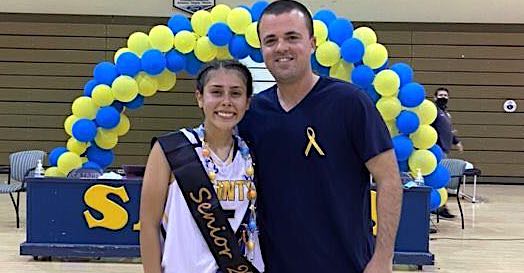 Sofia Maldonado, a senior shooting guard at Santa Clara (Oxnard), only needed 10 games in the 2020-21 basketball season to cement herself as the top player in the Tri-Valley League. And she did it while dominating on the softball diamond as well, as the two sports overlapped directly this season due to the pandemic-adjusted schedule.

In basketball, she averaged over 14 points and three steals a game to lead the Saints to an 8-2 regular season record and undisputed conference title, in addition to a CIF Southern Section 3A playoff berth. For her efforts, Maldonado was recently named the most valuable player in one of Ventura County’s most competitive conferences.

On top of it, she helped lead the softball team to an 11-7-1 season by hitting .367 with three home runs and 13 RBIs, and finishing with a lofty OPS of 1.050. That resulted in another first team All-Tri Valley League selection.

At the start of the school year, the 2020-21 basketball campaign didn’t appear to have the makings of a dream senior season for Maldonado. The Saints had to deal with the shutdown of high school basketball due to COVID-19, along with every other team in California. And on top of it, their head coach resigned in the spring of 2020, and the assistant coach that took over resigned early in the summer.

“Even if basketball came back, we didn’t know if we would have a season,” said Maldonado. “There was a long time during the summer when we didn’t have a coach, and we didn’t know when we’d get one.”

On top of it, almost all of Santa Clara’s basketball team also plays softball. So, the Saints would only be able to play 10 regular season basketball games, and practice just two to three hours a week.

Despite all the ways the pandemic jeopardized her senior basketball season, Maldonado made the best of it.

When Nick Kindel took the basketball head coaching job in the fall, she instantly felt like the team was in good hands.

“His vibe from the beginning was great,” said Maldonado. “It felt like, everything will work out fine, and he will push us to be the best that we can be. And it turned out awesome.”

Maldonado attributed much of her improvement from her junior year to Kindel.

“He’s super friendly and puts you in a good mood. I’m kind of shy, so I just felt kind of home and comfortable with him,” she said. “Coach Nick … was a big part of why my defense got better. I stopped getting into foul trouble. And our strong defense led to easier offense.”

Maldonado says she’s grateful for her coaches for handling the overlapping seasons so well, and for the focus by her teammates to successfully play two sports at once.

“Our goal was to be efficient in practice,” she said. “We wouldn’t slack off, we would be focused, we’d even end early sometimes because we were ahead. Then we’d go to softball and do the exact same thing.”

Another major reason for Maldonado’s big year on the hardwood, she says, was the emergence at point guard of her sister Ani, a junior.

“This year when my sister took over the point guard position, I was able to relax and be more myself,” said Sofia, who is more of an off-guard by nature.

As far as basketball being a family theme, that’s just the tip of the iceberg for the Maldonados. Sofia grew up hooping with and against her four sisters, three of whom are older than her, and says it was a big factor in making her the player she is today.

“After school we’d go play pickup, then go to practice on our teams, and then go back afterwards and play until like 7 p.m.,” she said. “Even to this day, my sisters [challenge me] to play one-on-one.”

Who wins most of the battles? Sofia says she thinks it’s her oldest sister Natalie, a former Saint who went on to play college basketball. But Sofia wins her fair share.

Maldonado is currently in talks with multiple junior college programs around Ventura County, and hopes to eventually transfer to a four-year school on a basketball scholarship. In the meantime, she believes in Ani to lead Santa Clara to another league title in her senior year.

“I want her to be more confident,” Sofia said. “She can have a fire season. Hopefully she can top me off.”