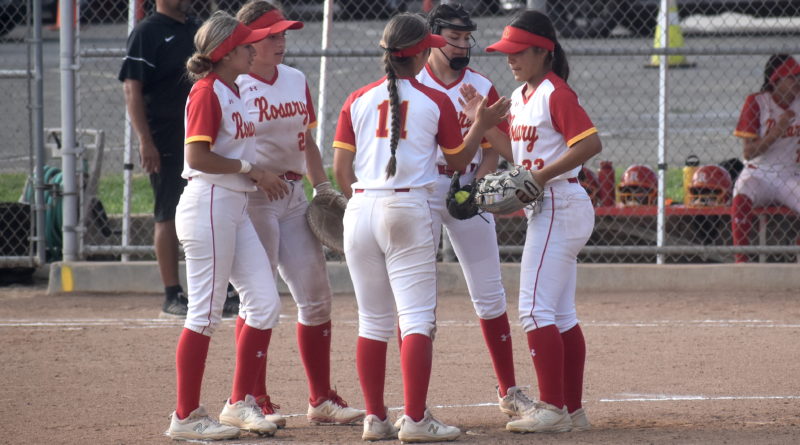 LA HABRA – Rosary Academy’s first inning against Selma to open the CIF state playoffs didn’t exactly go as planned. But it was more than enough to win them the game.

Samantha Pagan got the start for the Royals, and after getting two outs, she got drilled by a come-backer in her pitching hand. She had to exit the game with a jammed finger, and head coach Tom Tice says she is questionable for Thursday.

So, in came Natalie Romero, who closed out the inning without a problem, and then Rosary put up a five spot in the bottom of the first. That would be more than enough for the Royals, who added insurance runs in the third and fourth innings and won 7-1.

Romero threw 6.1 innings, allowed just one run which came in the third, and racked up 12 strikeouts. The opposing Bears struggled to catch up to her fastball, and notched just six hits on the night.

CF Hannah Hernandez made the play of the game in the top of the second inning, nabbing a runner at home plate trying to score from second base on a single. In a game where Selma’s comeback would’ve needed to start right away to have a chance, the play seemed to be a very early nail in the coffin, and only increased the momentum the Royals already had.

Next, Rosary Academy, the Southern Section Division 4 champion, will travel to face CIFSS Division 3 champion Sultana (Hesperia) in the CIF Southern Region Division 2 playoffs. Per Tice, Pagan is expected to pick up where she left off in the circle if her hand is ready to go.

With only one senior on the team, the Royals’ entire starting lineup is returning next season. Whatever comes of the rest of the playoffs, they will enter next season with as much experience and championship pedigree as any team in the section.