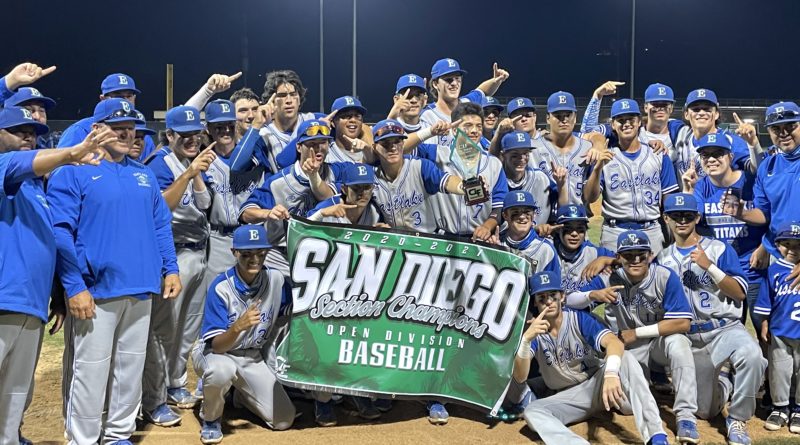 “Me and Marcelo became friends, and we knew we wanted to win a championship every time we played,” Cebulski said.

On a warm summer night at Poway High School, both players were key. And when the dust settled, both were 2021 CIF San Diego Section Open Division Baseball champions, taking down Grossmont by a score of 8-3 to make good on a sense of ambition that had spanned several years.

“I don’t know how to explain it, but it feels great,” said Cebulski after the last out. “We took it home for ‘The Lake.’”

Cebulski, a senior right-handed pitcher, turned in 6 1/3 innings on the mound, striking out 10 while allowing three earned runs. For Mayer, a 3-for-4 evening with an RBI and a run scored. For the team, an offensive eruption set into motion from the game’s first inning on, with Eastlake scoring two runs in the top of the first inning and bringing runners home in four different frames.

“It was huge,” Titans head coach David Gallegos said of his team’s hot start at the plate. “Because (Grossmont) has an explosive offense … we just told our guys to stay within themselves and finish the game strong.”

Mayer wasted no time in getting scoring started for Eastlake, driving in the game’s first run with a first-inning RBI single to right field to plate Daniel Mora before Ethan Lizama — who had reached on an error — came around to score as Nico Vallarelli tried to leg out a dropped third strike. The Titans exited the inning with a 2-0 lead, then doubled their advantage in the following frame via an error by Grossmont left fielder Noah Barnes that allowed two runners (Brett Leonhardt and Sabastian Sanchez) to score.

And by the end of the night Eastlake had doubled their lead yet again, putting up eight runs in total behind an RBI single from Nico Libed, a home run from Leonhardt, a double from Daniel Mora, and a sacrifice fly from Lizama.

“We executed our gameplan, and we came out as champions,” Mayer said.

The Foothillers battled back with a run of their own in the bottom of the second and a pair of runs in the bottom of the fifth, but were largely stymied by Cebulski, who allowed three earned runs and scattered four hits. The senior right-hander was denied a complete game perhaps only because of his pitch count, running up 109 pitches before Gallegos removed him with one out in the bottom of the seventh amid a raucous ovation from the Eastlake faithful.

“I think it was all adrenaline,” said Cebulski. “That just kept me going. I pride myself on the last two innings, to be able to keep the focus up as high as possible.”

The title marks the latest in a storied history for the Eastlake Titans, but the significance of Saturday night’s win wasn’t lost on their head coach.

“Any time you win an open Division championship, you’re the best out of the best,” Gallegos said as the postgame celebration continued to unfold around him. “So its huge … We had some bad games there at the end but then we just put it together, and the kids believed, and the mentality was there.”