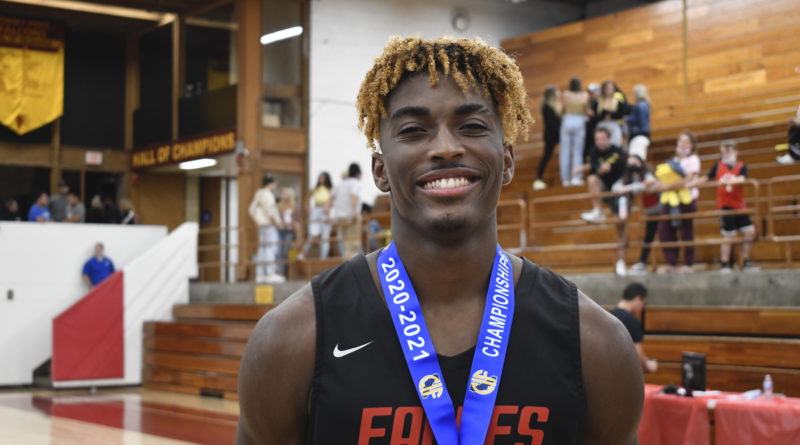 CARMEL VALLEY, CALIF. — Etiwanda didn’t get to start the season when most of California did, but the Eagles made the most of their two months, capping it off with a 68-65 win over previously unbeaten Torrey Pines in Saturday’s Southern California Regional Open Division Championship game.

The Eagles caught fire from long range in the second quarter and were able to head into halftime with a commanding 44-27 lead.

“Our defense led to offense and we got some easy baskets on them,” Etiwanda Head Coach Dave Kleckner said. “(Torrey Pines) is so stingy defensively that they’re not gonna give you very many easy looks. We knocked down some perimeter shots and we got some points off our defense and I thought that’s what really got us going.”

The Eagles maintained their large lead until Torrey Pines was able to string together a couple stops and capitalized on the other end for a 12-0 run to end the third quarter. Once down by 19 points in the third quarter, two free throws from Nate Witte cut Etiwanda’s lead to just one point with less than four minutes to play.

Coming out of a timeout with nine tenths of a second to play, Torrey Pines drew up a shot for a potential game-tying three-point attempt by Nick Herrmann, but he slipped coming off of the screen, knocking the ball out of bounds and finalizing the victory for the Phillies.

For Etiwanda, the journey started back in March of 2020. The Eagles were coming off of a loss to Sierra Canyon, their third of the season to the Trailblzers and would have the sports world turned upside down by COVID-19 just two days later.

“Man, I couldn’t be happier for the kids,” Kleckner said. “The way we ended our season last year with that loss (to Sierra Canyon) in this game a year ago, it really broke everybody’s heart. It was very devastating, but I think all of us got stronger for it.

When most teams were getting reared up for practice and their first games of the season back in March, Etiwanda would have to wait another month to get their games started.

“I didn’t even lay eyes on my players until mid-March and that was tough,” Kleckner admitted postgame.

The key to the Eagles run in June? Tennessee-bound wing Jahmai Mashack.

“The kid is just driven, he wanted it… and nobody is gonna get in his way or stop him from his goals,” Kleckner said.

Mashack had 21 points for Etiwanda including two huge free throws late to keep the Falcons at bay.

“The teams that I played with during this four years, man they’ve all been great and it’s all my embedded in my memory and in my heart. To be able to cap it off like this in my senior year I wouldn’t want it any other way,” Mashack said.

Etiwanda captured the Baseline League before getting redemption against Sierra Canyon in the section championship and completing the campaign with Saturday’s win for additional hardware.

“We put in the work, we’re in the lab, we know how to play this game, so putting it together was the easy part,” Mashack said.

“The hard part was just trying to get to be able to play and get to the season.”