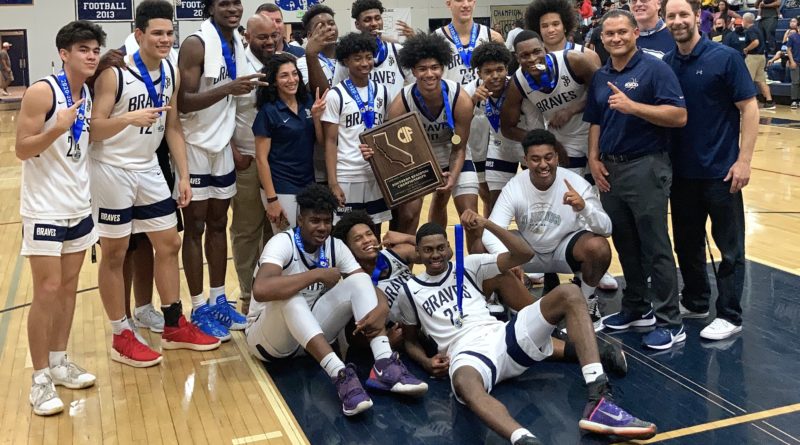 BELLFLOWER, Calif – After a late start to the 2021 California high school basketball season, the St. John Bosco Braves closed it out in style by beating Ribet Academy 70-68 on Saturday night to capture the CIF State Division I-AA SoCal Regional Championship.

The win marks the second time this postseason Bosco has defeated the Fighting Frogs. Previously, the Braves defeated Ribet 76-66 in a pool play consolation game in the CIF Southern Section Open Division playoffs.

St. John Bosco head coach Matt Dunn talked about the task of trying to defeat Ribet Academy a second time within a two-week span. “They’re incredibly talented,” he said. “They have some good players in [Barrington] Hargress, [Tyler] Powell, and [Mike] Price”.

Anthony White led the way for Ribet Academy with 34 points, while Price added 15 points to keep the Frogs in the game for most of the night.

Senior standout Scotty Washington led the way for Bosco with 23 points. Lamaj Lewis, who is on his way to Loyola Marymount, contributed 12 points, while Hunter Richardson added 11.

With all of the craziness the last year has presented, coach Dunn attributed his team’s success to how they have stuck together since last June.

“This is such a close-knit group. It takes a great group of leadership to get us here,” Dunn said. He gave credit to senior leaders Lewis and Washington for setting the example to their teammates through their attitude and determination.

“I think any time your best players are really hard workers and especially program guys – they really only care about winning,” said Dunn. “And I know that is something we think everyone is about. But especially talented kids that is a pretty special, rare thing these days.”