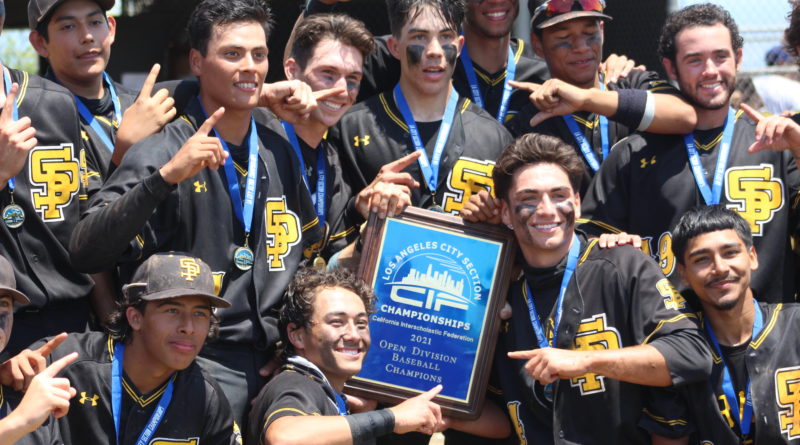 SAN PEDRO — When the Los Angeles Unified School District announced that student athletes could only play one sport at a time this spring due to COVID-19, San Pedro senior Dylan Kordic knew he needed to play baseball instead of football.

“I had a bigger goal to achieve,” Kordic said.

There was no City championship in football this spring, but there was one in baseball and with Kordic playing for the majority of the season, San Pedro had a chance to win it.

“Growing up we all played travel ball together,” Kordic said of his teammates. “Our plan was to come to San Pedro and bring home a title.”

And on Saturday afternoon Kordic delivered. The senior struck out El Camino Real leadoff hitter Wyatt Babcock to win San Pedro’s second baseball title in school history and first since 1992. The Pirates came from behind to win 7-6.

“I was mentally locked in,” Kordic said. “I was ready to go. I knew what I had to do. They threw me in there. I just had to do my job and get the dub.”

Kordic’s save was only the second pitching appearance he’d made on the season. Despite his lack of innings, San Pedro head coach Steve Tedesco knew Kordic was the player he could trust to win his team the game.

“We were saving him for this game,” Tedesco said. “We wanted to keep that ace up our sleeve the whole time because we knew he was the guy we wanted to have the ball in his hand with the game on the line.”

With San Pedro clinging to a 7-6 lead, Kordic pitched the final two innings to clinch the championship. He struck out three and allowed two hits. In the final frame, El Camino Real had the tying run on third with two outs.

“I was ready for this moment,” Kordic said.

In the third inning San Pedro trailed 5-1 after El Camino Real shortstop Dominic Carnes hit an RBI single. The Pirates picked up two runs of their own in the bottom of the third and then El Camino Real went up 6-3 in the top of the fourth inning on a Josh Wood sacrifice fly. At that point the Conquistadors had all of the momentum.

But in the fifth inning, the Pirates bats came alive.

Junior catcher Mikey Brucelas hit a two-RBI double and Dom Porter followed that up with a two-run home run over the left field fence.

“I knew it was out right away,” Porter said. “I didn’t believe it was real. It felt like a dream.”

Porter’s bomb ended up being the difference.

San Pedro’s City title win is the first upper-Division baseball championship from a team outside the San Fernando Valley since 1992 when the Pirates won their first title.

“It’s about damn time,” Tedesco said. “This win is for San Pedro.”