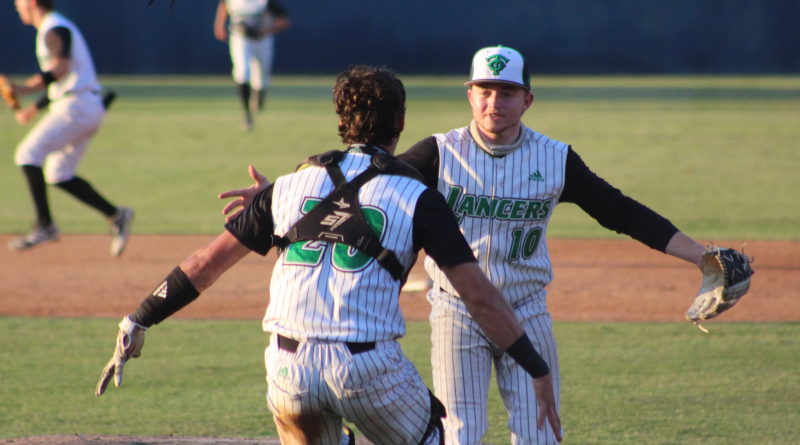 FULLERTON, Calif. — Thousand Oaks super slugger Roc Riggio did something he hasn’t done all season in Saturday’s Division 2 Southern Section championship game: make two errors. But like the Lancers have done all year, they didn’t let their mistakes lead to losses.

“I make an error, my team comes in there and they pick me up,” Riggio said. “When you’ve got a team that backs you up, they keep you in the game.”

In the fifth inning, Riggio bounced back to score the game-winning run on a wild pitch, giving Thousand Oaks a 3-2 victory.

Trabuco Hills scored the game’s first run after Riggio, who plays second base, overthrew his first baseman on an attempted double play in the first inning. Mustangs sophomore Joey Gray hit an RBI triple following Riggio’s miscue. The Lancers got a run back in the bottom of the first, but then in the second, Trabuco Hills retook the lead thanks to a Nick Perez RBI single.

In the fifth inning, Lancers nine hitter Peyton Miller hit a two-out single. Riggio was then hit by a pitch giving Thousand Oaks runners on first and second. The next batter, Easton Rulli, popped up a ball between the Trabuco Hills shortstop and left fielder that dropped due to a miscommunication and Miller scored. Riggio then touched home after a wild pitch.

“My mindset was just to do my job,” Weiss said. “I knew that my teammates were going to help me out and put runs up on the board. I was just trying to pitch to contact and get them to swing.”

In the top of the seventh inning with Thousand Oaks holding their slim 3-2 lead, Weiss retired the three Mustangs he faced in order striking out one and getting two hitters to fly out.

Trabuco Hills star senior pitcher Mason Molina got the start for the Mustangs and struck out nine in six innings.

“Mason is a great competitor,” Riggio said. “He looked good. He’s definitely one of the best arms we’ve seen this year.”