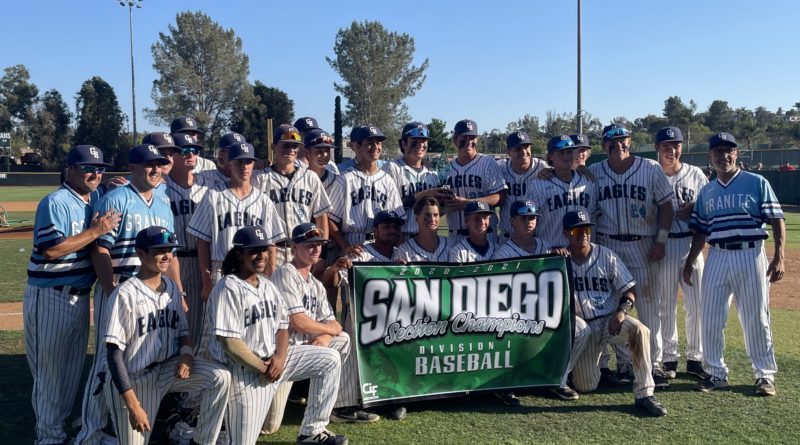 POWAY, CALIF. — Hudson Beamon lifted the first pitch he saw in the bottom of the seventh inning to shallow left field. Alex Gibaud retreated to third base and waited. Then the ball landed just beyond the infield dirt, Gibaud dashed home, and the celebration began for Granite Hills as it won the 2021 CIF San Diego Section Division I baseball championship, taking down Point Loma by a 3-2 margin at Poway High School.

“Our heads are in the game. You can never count us out until it’s over,” Beamon said after the game.

The Eagles’ seventh-inning rally began with a sharp single through the right side from Gibaud. He advanced to second base after Point Loma (20-13) catcher Nick Garcia overthrew second base while trying to catch Gibaud stealing, turning a likely out into a runner in scoring position for Granite Hills. John Taylor then advanced Gibaud to third in the following at-bat, setting the stage for Beamon’s walk-off single.

“When I was coming up to the plate, I was just thinking, ‘I gotta put something in the outfield and get our runner to score,’” said Beamon. “I got a little under it, but I made it work.”

Beamon’s well-placed single punctuated a taut, well-played affair on what was by all accounts a picture-perfect day for baseball in North County. Granite Hills (25-10) starter Noa Ponciano turned in four strong innings, scattering four hits while allowing two runs and striking out five. The senior righty was able to settle in after a turbulent first frame that saw the Pointers strike first with a pair of runs via a walk, an error, a double, and a single, earning them an early 2-0 lead that would keep them in front until the bottom of the fifth, when Granite Hills’ Grant Mac Arthur laced a single up the middle to plate John Taylor and knot the game at two runs apiece.

“Ponciano is one of the best pitchers that I’ve coached in years,” Eagles head coach James Davis said of his starter. “You’ve got to get to him in the the first inning, because normally he calms down and starts performing. He can throw all three pitches for strikes, and that really helps.”

Opposite Ponciano on the mound was Vanderbilt committ Duke Ekstrom, who set forth a strong start of his own with five innings of two-run baseball, also allowing four hits alongside six strikeouts. But in the end, it was perhaps 6-foot-4 Granite Hills freshman Chandler Henry who left the most lasting impression on the pitching side of things as he tossed three hitless innings to conclude the game for the Eagles, striking out three against a pair of walks.

“To have a freshman out there for three innings, to pitch like he did and get out of trouble, is pretty special,” said Davis.

Minutes after his team had completed a remarkable rally to earn the 2021 CIF-SDS Division I Championship, the head coach reflected on what marked a whirlwind conclusion to his team’s season.

“Gritty … gritty and tough,” Davis described of the Eagles’ effort. “We had comeback wins all week long … we just kind of kept grinding.”