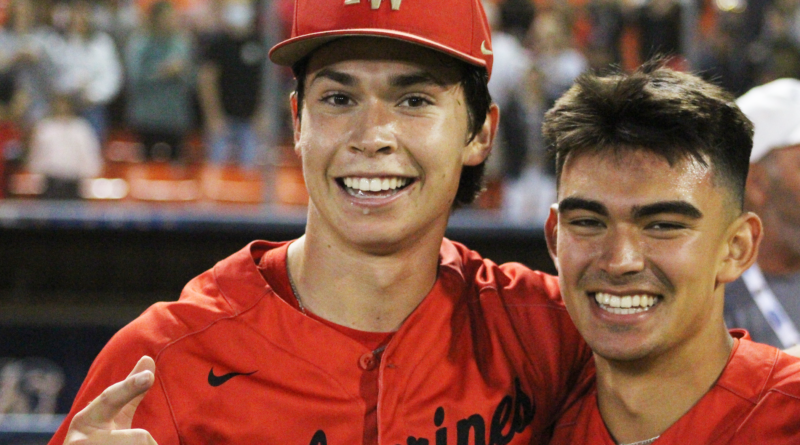 That came mere minutes after the Cal commit threw a complete game shutout striking out seven and allowing only one hit in Harvard-Westlake’s 3-0 victory over mighty JSerra in the Division 1 Southern Section championship.

“It feels really good to be the guy and bring it home,” Becerra said.

Harvard-Westlake scored two runs following a throwing error from JSerra starter Eric Silva in the top of the third inning. Wolverines junior Jacob Galloway dropped down a sac-bunt and Silva threw the ball away going to first base. Alex Shane and George Cooper scored on the error.

That was all the run support Becerra needed.

“We got ahead early and once you get ahead early it’s kind of easy to just cruise your way through there,” Becerra said.

Becerra has now twice shutdown JSerra’s loaded lineup this season. He threw five hitless innings in a 2-1 Harvard-Westlake win over JSerra in March before his one-hitter on Saturday. JSerra exploded for 11 runs in their semifinal victory over Ayala hitting three home runs. Only Luke Jewett recorded a hit in the championship.

An RBI single from Alex Shane gave Harvard-Westlake a 3-0 advantage in the top of the seventh and that was the final.

“We knew this was going to be a dog fight,” Becerra said. “This feels really good.”