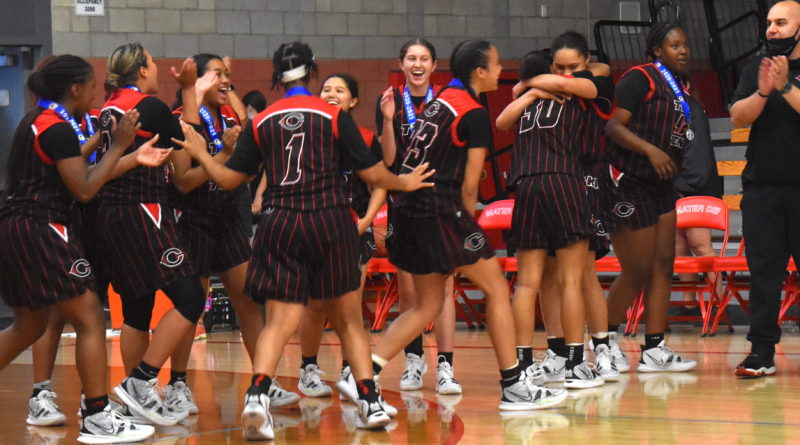 Cen10 built a double-digit lead in the first half just like in the previous meeting, and also like in the section finals, Mater Dei was able to chip away at it. A 13-point edge after the first quarter turned into a 30-23 halftime score, and the Monarchs made it a single-possession game in the third quarter. The game seemed poised for another thrilling finish.

Instead, the Huskies withstood every blow without letting the momentum fully swing in Mater Dei’s favor, and Jayda Curry scored 14 of her game-high 27 points in the third quarter. Their lead steadily escalated back into double-digits by the middle of the fourth quarter, and they kept Mater Dei from taking the game down to the wire, with the final score reflecting one of Centennial’s biggest leads of the night.

“From the game we lost in overtime… nothing changed. The game plan was identical,” said Cen10 head coach Martin Woods after the game. “The difference was, we executed today.”

Last time in the section finals, Mater Dei’s star Stanford-bound senior Brooke Demetre scored a game-high 28 points. And, like in that game, Centennial F Trinity San Antonio had the assignment and played excellent defense on her all game, but this time, Demetre was held to two points.

“I’ve said all along that Trinity San Antonio is so underrated,” said Woods. “She’s one of the best defenders in the country, period, and she showed that tonight.”

Centennial is the smallest team of all state powerhouses by a margin, without a single rotation player taller than 5-9. Mater Dei marks another lengthy heavyweight the Huskies took down – and in this case, forced into its toughest offensive night of the season – despite having a massive size disparity.

“90% of our practices are defense. We get out-rebounded in almost every game. But because of our conditioning and our tempo, it kind of wears teams down throughout the course of a game,” said Woods.

“When kids buy in, great things happen. They hate our practices because they’re really intense, they’re really tiring. But they bought into it because now they see the results of the hard work at practice, to sustain the tempo, the physicalness, sacrificing their bodies – it’s because of how they prepare, and that’s why they won.”

Despite losing elite seniors, Centennial and Mater Dei will again enter next season on a shortlist of favorites to compete for more section and state open division titles.

“I tip my hat to Kevin [Kiernan], he’s one of the best coaches in the country… to beat a team under his leadership, it’s special,” said Woods. “I’m just happy for my kids more than anything.”

“By far, this is the best collection of kids I’ve ever had… just amazing individuals.”

**Here are all our photos from after the game.