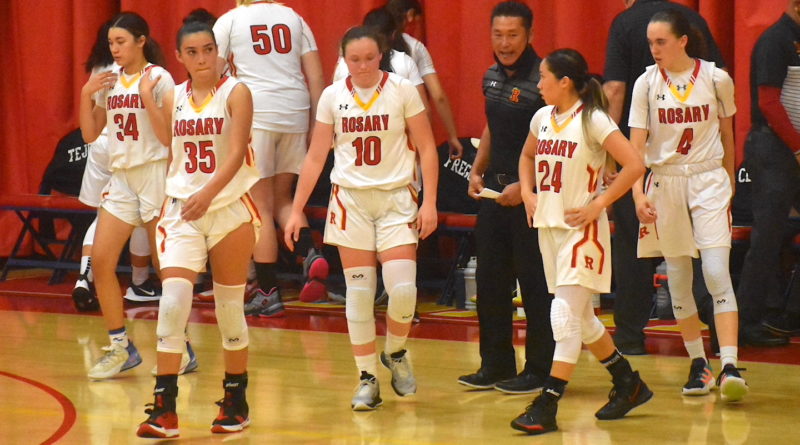 FULLERTON, Calif. – Kaylee Byon led Rosary Academy with 19 points and seven assists in a 55-49 win against Fairmont Prep on Thursday in the CIF 1-A Southern Region girls basketball semifinals.

The Royals trailed after every quarter except the last one, but neither team ever held a lead greater than seven points in the wire-to-wire chess match. Mia Yamamoto led all scorers with 23 points for Fairmont. Here are five takeaways from the game:

With this win, Rosary Academy has made it to a CIF Southern Region title game at the Division 1 level for the third straight season. However, that actually undersells what the Royals have been able to achieve in the last three season.

Not only did they make it to the CIF Division 1 regional finals in the 2018-19 season, but they went all the way and won the state championship. In the 2019-20 season, the Royals again not only made it to but won the Division 1 Southern Region championship. However, the state finals were canceled, as the COVID-19 shutdowns started in California just a couple days before the championships were set to take place.

So, Rosary is more than just a Division 1 regional finalist for the third time in a row, but they’ll be able to make that claim at the very minimum when this season finishes.

While Ava Dominguez was no stranger to being able to sink an occasional long-ball coming into this game, her performance from downtown warrants a new page in her scouting report. She smoothly knocked down four catch-and-shoot corner threes at momentous times, and hardly missed a shot on the night. By late in the game, Fairmont’s defense was stretching to account for her, which opened up more spacing for Rosary and also a driving finish attacking a closeout. Dominguez scored seven points in the fourth quarter, to go with Byon’s 10, which accounted for all the team’s fourth quarter points.

Rosary isn’t short on floor-spacing, but with Dominguez on the way to becoming a bona fide stretch five, that greatly expands what the Royals’ can look to do on offense going forward.

Both teams have one of the section’s premier playmaking point guards, and both opted to load up on each other’s defensively.

Barker, one of Rosary’s longest defenders who often guards bigger wings and forwards, face-guarded Fairmont Prep’s AnLing Su Vera the entire game. She held her to just five points, although Su Vera was still able to rack up 11 assists. Barker also scored seven points and notched her share of both rebounds and assists, and Allison Clarke added 11 points and a strong defensive impact too for Rosary.

Ishibashi gave a similarly dedicated, impressive effort on Byon. Byon still finished with 19 points and seven assists – which would be a career night for most players – but shot well below her average from the field, and didn’t fully take over the game as she so often does. Ishibashi finished with 10 points as well.

Fairmont center Makaila Glynn picked up her third foul shortly before halftime, and had to sit the first half of the third quarter to avoid number four. As the only true post player on a team lacking front-court depth, Glynn had to play it safe from then on. It didn’t lead to any dramatic runs, but it was a big victory for the Royals as they were able to start building momentum without her size and physicality as soon as the second half started.

END OF AN INCREDIBLE ERA FOR FAIRMONT

With no more potential playoff games left, this loss marked the end of an amazing two-season run for the Huskies led by one of California’s top senior classes. During a time of transition when many expected Fairmont to fall from relevance, the program reached some of its highest peaks ever, including making a CIFSS 2-AA final, Division 1 semifinal, and state 1-A semifinal.

That doesn’t mean the Huskies are done growing and contending with them gone, but it’s going to be a different era from now forward nonetheless.