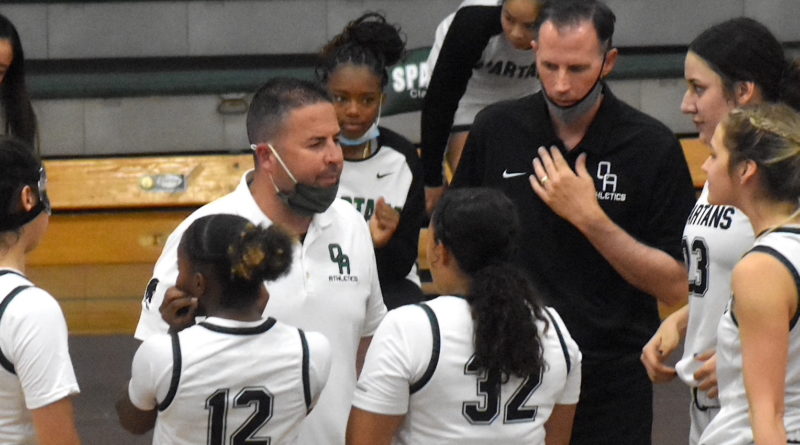 Hernandez, a 6-3 senior post who signed with Cal State Fullerton just a day prior to the game, posted a career-high 29 points to go with 11 rebounds and multiple blocks. She was a starter on OA’s senior-heavy CIFSS 2-AA championship team last season, but her emergence as an offensive focal point and her increased presence protecting the paint have been among the biggest reasons the Spartans have remained elite in 2020-21. Not only has she improved at catching and finishing plays in traffic, but her passing and high post/mid-range scoring have been on display as well. And Hernandez has a rare combination of size, agility, and motor that allows her to make hustle plays anywhere on the court.

Stines, one of the Southern Section’s top juniors, had an off-night shooting the ball but still had a dominant effort with 15 points, 16 rebounds, three blocks, and 10 assists for a triple-double. Keyla Romo and Krystal Caldwell added 13 points and nine points for OA, respectively, as well, and both stood out defending on the perimeter.

While Carlsbad came ready to play and gave them a strong effort, the Spartans led 34-23 at halftime, and seemed to be in control of the game from start to finish.

The Lancers were led by Renza Milner’s 16 points, Madison Huhn had 12 points, and Alexa Mikeska scored 10. They ended their season 16-6, and will return one of the top backcourts in the San Diego Section in the 2021-22 season.

OA will go on to host Lynwood on Thursday in the 1-AA regional semifinals, which will be a rematch of the Spartans 59-47 victory on 5/1.