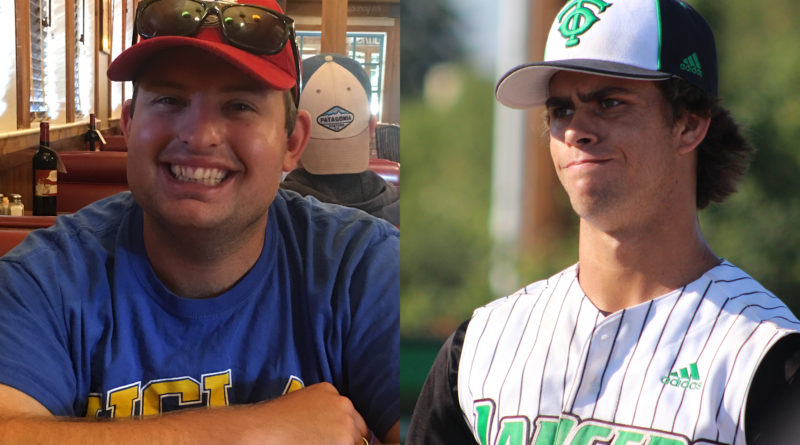 THOUSAND OAKS, Calif. — Every time Max Muncy gets in the on-deck circle during home games, he hears the same four words.

The endearing and calm cheer comes from Ryan “RyRy” Davis, a Thousand Oaks High School super fan who in 2012 was called Mr. Mayor by the city’s local newspaper, The Acorn.

Davis, who has a mild mental disability, has been around Thousand Oaks High School sports his whole life.

Davis’ father Mark coached many of the top prep baseball players in Ventura County in the 1990s and early 2000s after playing professionally. He’d work with them at the Thousand Oaks field, which is where Davis took his first ever steps after doctors told Mark and Christina that their son would never walk.

“We were in shock,” Christina said. “We were like ‘oh my god, he’s walking.’ Ryan was delayed with many things as a child and walking was one of them so when he started walking and it was right there we were all screaming and yelling.”

Nearly 30 years later, Davis, who is 31 years old, is still going to the Thousand Oaks baseball diamond. He was a bat boy for the team for a period in his 20s and although he no longer sits in the dugout, he still comes to every home game he can get a ride to, which is just about all of them.

He has worked with the Lancers football team, boys’ basketball and boys’ lacrosse teams, as well as a few other youth sports organizations, but Davis loves the Thousand Oaks baseball team the most.

And the Thousand Oaks players are big fans of Davis — they’re pretty much all friends. Junior Easton Rulli usually gives Davis a ride to Toppers, a local pizza place the team eats at following victories. They treat him like one of the guys.

“We all have a really special relationship with him,” Saum said. It’s really cool to have him around for sure.”

Davis has loved every Thousand Oaks baseball team he’s worked with and cheered for, but this year the connection is different.

Thousand Oaks is 27-1. They’re one of the top teams not only in California, but the country. On Tuesday, they’ll play Bonita in the CIF Southern Section Division 2 semifinals.

“I have never heard Ryan talk so much about one specific team,” Christina said. “Ryan is in awe. He’s so excited. It’s like the dream is happening. They’re going all the way. Ryan is a gamer and he is a champion of the athletes there, especially the good, compassionate people.”

One of the most compassionate is Muncy, a senior who is one of the top prospects in Southern California high school baseball.

This spring Muncy has set the Thousand Oaks RBI record and hit four grand slams. He’s a phenom, but that’s not the only reason Davis loves him so much.

“Ryan’s vocabulary, although it may not be like everyone’s, sometimes he whips out things that are absolutely surprising,” Christina said. “He tells me, ‘Max is really nice, mom. Max is going to be a really good baseball player. Max is a good man.’ That really touched me.”

Those in the Southern California high school baseball community know all about Muncy’s skills — he’s signed with the University of Arkansas and is one of the best hitters in the state. He will almost certainly hear his name called during July’s MLB Draft.

But they may not know that the subject of all of those scouting articles and video clips of home runs and web gems is as kind as he is talented.

“He’s my number one favorite player because he treats me nicely,” Davis said of Muncy. “He’s very nice to me every day.”

Muncy doesn’t only hear the “I love you’s” when he’s up next in games. Davis also says it in conversation and Muncy says it back.

“He loves me too,” Davis said

They have a special bond.

“He’s always happy,” Muncy said of Davis. “It’s always great to have that positive outlook from him. He’s always stoked to see me even if I know I didn’t do too hot.”

There’s only two weeks left in the Southern California high school baseball season and pretty soon Muncy and the other seniors that Davis cares so much for will graduate and continue their baseball careers in the pro and college ranks.

But just because their time in high school is coming to a close, doesn’t mean their friendships with Davis will end. They’re going to last a lifetime.

“Ryan’s growth has always been around sports and being around really good young people,” Christina said. “He’s continued to keep those relationships. These young people that he meets now, I promise you he’ll know 20 years from now and know their wives and children just as he knows other families from the past as well.”