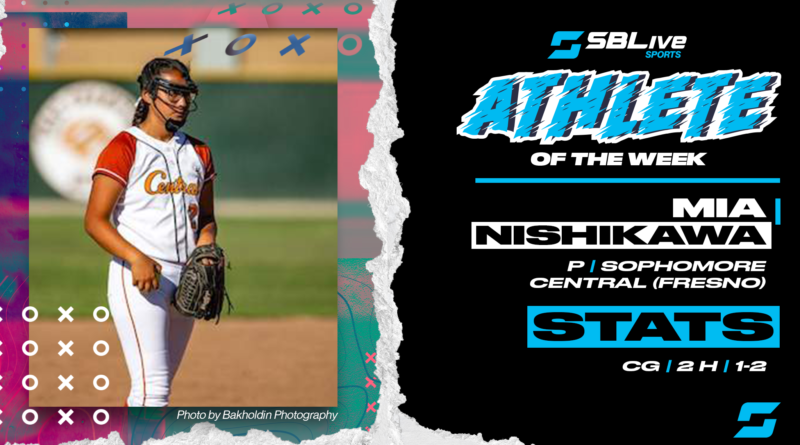 Congratulations to Central (Fresno) softball sophomore Mia Nishikawa for being voted SBLive’s Northern California High School Athlete of the Week for May 31-June 6!

Nishikawa ran away with this week’s honor, receiving 73.52% of the total vote.

Aaliyah Thompson, Corcoran girls basketball: Thompson went for 27 points on 80% shooting, six blocks, and a season-high 16 rebounds in Corcoran’s only game of the week, a 77-62 victory against Rosamond.

Makena Goldbeck, Maria Carrillo softball: Goldbeck pitched 8.2 innings without allowing an earned run in an extra-innings win against Cardinal Newman. She also went 2-4 at the plate.

Meika Lauppe, East Nicolaus softball: Lauppe was dominant in the circle for both games of a two-game sweep of Paradise, totaling 11 inning with 16 strikeouts, only three baserunners allowed, and no runs.

Daniel O’Sullivan, Colusa baseball: O’Sullivan led Colusa to a two-game sweep of Live Oak batting 5-7 with a triple, a home run, and a walk, eight RBIs, and five runs scored.

Tyler Van Dyk, Central Catholic baseball: In a 2-0 week for the Raiders, Van Dyk threw a complete game allowing no earned runs, and also went 3-8 with two RBIs at the plate.

Elijah Rogalski, Rio Americano baseball: Rogalski played in three games of Rio Americano’s 4-0 week, throwing four scoreless innings across two games for a win and a no-decision, racking up nine K’s. In Wednesday’s game, he went 4-4 with two doubles, a triple, and a home run, and came around to score five times will driving in four runs.