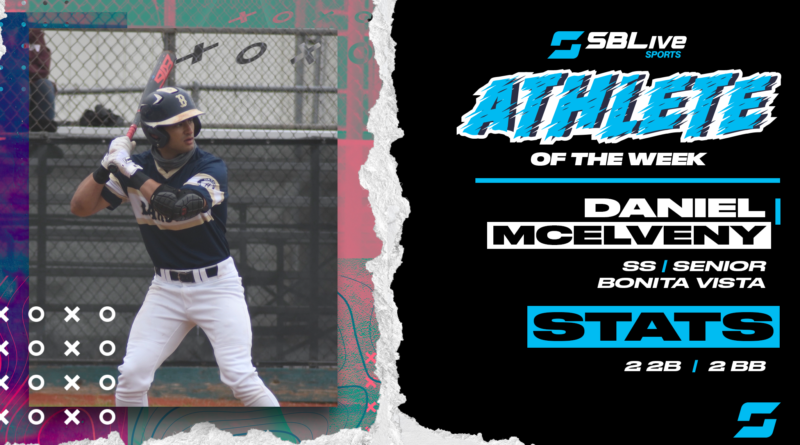 Congratulations to Bonita Vista senior Daniel McElveny for being voted SBLive’s Southern California High School Athlete of the Week for May 31-June 6!

The senior had two doubles and two walks to help the Barons take down Otay Ranch, 5-1, to capture the Metro Mesa League championship.

McElveny ran away with this week’s honor, receiving 90.63% of the total vote.

Jon Pearson, Canyon Crest G: Pearson had 49 points to propel the Ravens to a first round win over Eastlake in the San Diego Section Division 2 playoffs.

Olivia Gigante, Patrick Henry 1B: Gigante has hit seven home runs in her last six games, giving her 16 on the season.

Emmy Cardenas, La Jolla RHP: Cardenas has 19 hits during her current 12-game hitting streak and is batting .550 so far this season.

Ella Parker, Sherman Oaks Notre Dame LHP: Parker has seven home runs and three triples in her last six games and is hitting .594 on the season.

Brooklyn Carreon, Whittier Christian RHP: Carreon has struck out 42 batters during her past four starts and has not allowed an earned run during that time.

Nathan McManus, Yorba Linda LHP: McManus threw six innings without allowing a hit to help the Mustangs take down Villa Park in the first round of the Southern Section Division 2 playoffs.

Scott Young, Mission Viejo OF: Young went 2-4 with a home run and three runs batted in last week in a first round win over Marina.