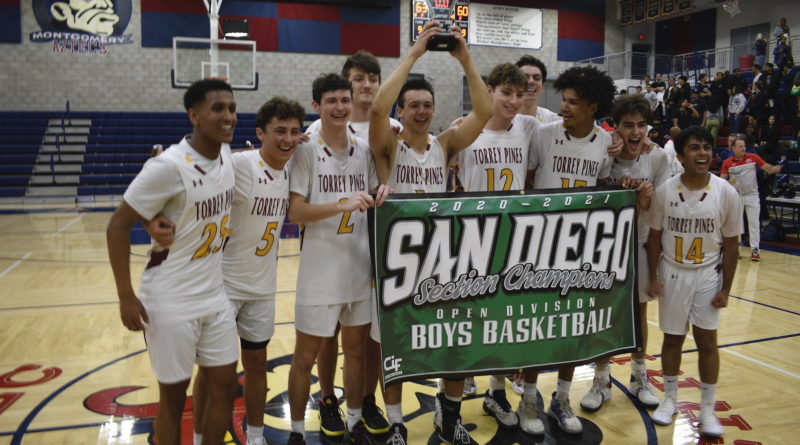 And it was a thrilling finish.

Trailing 60-57 with 15 seconds to play, Cathedral Catholic’s Shea Fitzgerald was fouled on a three-point attempt and made all three free throws to tie the game.

Torrey Pines worked the clock down for a final shot and Nick Herrmann’s three-point attempt from the right wing was tipped out of bounds and awarded to the Falcons with 0.5 seconds showing on the clock. Without any timeouts remaining, the Falcons had to act quickly and figure out their plan.

“I just yelled at the two guys up top to double screen away for the top guy, which was Nick. He didn’t even use the screen he just popped out even further,” Torrey Pines head coach John Olive said after the game.

Herrmann did just that, catching a baseline inbounds pass from teammate Nate Witte and firing a shot from the left wing, about 30 feet from the basket. The shot hit nothing but net, sending the gym into a frenzy.

“I saw there was time on the clock, and we didn’t really run anything, so I just ran off screens,” Herrmann said. “I’m lucky enough to have teammates like Nate Witte that know that I want that shot and I want that moment.”

Things weren’t always looking great for Torrey Pines, as they found themselves trailing 22-11 after the first quarter.

“We had to get comfortable, we had to do a better job of fronting the post and boxing out,” Olive said. “Once we got comfortable and started doing those two little things, I thought that we clamped down pretty good.”

A 13-0 second quarter run keyed by Herrmann propelled the Falcons in front, giving them a 30-29 halftime lead.

The teams went back-and-forth throughout the second half with neither able to stretch the lead beyond a two-possession game.

When the Falcons won the Open Division Championship in 2019, Herrmann was unable to play having missed the entire season while battling Osteosarcoma, with a cancerous tumor in his left leg.

Herrmann delivered in a big way on Saturday night, finishing with 30 points including going 14-of-15 from the free throw line.

“Special kid,” John Olive said of his senior guard. “There’s not many kids in this country that could’ve done what he has done, what he has gone through with all of the medical issues he’s had and to be able to play at this level, it’s astonishing.”

Herrmann and the Falcons will be back in action on Thursday, trying to keep the undefeated record going. The Falcons were awarded the top-seed and a first-round bye in the Open Division of the CIF SoCal Regional Championships. They’ll host the winner of Damien and St. Joseph (Santa Maria).