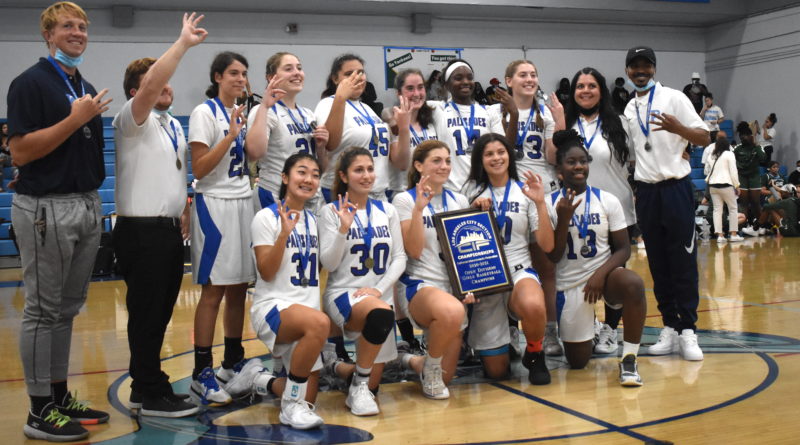 PACIFIC PALISADES, CALIF. – The top storyline in L.A. City Section girls basketball this season from start to finish was whether or not anyone could catch Palisades.

At this point, it’s practically an afterthought that Pali is also a two-time reigning CIF Southern Region champion, winning CIF Division 3 in 2019 and Division 2 in 2020, and could very well pull off a regional three-peat as well this month.

The Dolphins jumped out to a 15-6 lead, but Hamilton came roaring back to tie the game at 17 a couple minutes into the second quarter. Following a timeout, Palisades regained its footing to win the rest of the quarter 13-3, and quickly ran away with the game in the third quarter, with its lead nearing 30 at times.

Hamilton battled all game and cut the final deficit to 18 points, but Palisades head coach Adam Levine was able to give every one of his players significant run during the fourth quarter. That included a very brief cameo for F Taylor Arnold, who has been out for multiple weeks with an ankle injury she sustained or aggravated during Pali’s regular season win against Hamilton.

Three Dolphins finished in double-figures, led by 17 from Demonnie Lagway and 12 each from Alexis Pettis and Ivy Scott. Sammie Arnold chipped in seven points.

Sydney Blevins scored a game-high 23 points for Hamilton, but Pali held all other Lady Yankees to single-figures in arguably its strongest defensive showing in a playoff game yet. Sherisse Chensam and Trinity Conner both added eight points.

“If in December, you would’ve told me we’d have a season, I would’ve said, forget about it. The fact that we were able to get this in for our four seniors was pretty meaningful,” said Levine after the game.

“It feels like a sigh of relief. This year, we were the one-seed the whole time, and had the target on our back. [Hamilton is] a tough team, and hard to guard. They’re a great opponent.”

Palisades has had to outlast rival Hamilton five times over the past two seasons, including three regular season games that came down to 10 points or less. While Hamilton looked poised to give Palisades its biggest test yet early in the second quarter, the Dolphins’ rout of Hamilton for nearly two quarters after that appeared to signify the biggest gap there’s been between them during the two seasons.

Now, Pali will turn its focus to competing for a third straight CIF Southern Region championship, and Hamilton will likely make a CIF Division 2 state playoff birth as well.