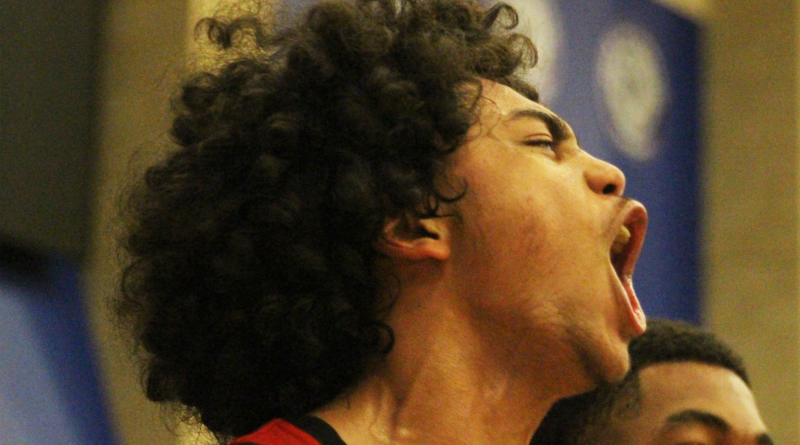 CHATSWORTH — There were seemingly a million distractions.

None of it fazed Corona Centennial.

Leading into Friday night’s Southern Section Open Division championship game, head coach Josh Giles told his team: “Don’t get caught up in all the stuff that’s around you, focus on the game. We’re here to win the game.”

And they did, 80-72 against Sierra Canyon, the team that came in undefeated at 15-0. The team that had won its last 21 playoff games. The team with arguably the best player in California, junior guard Amari Bailey.

“I don’t think we’ve really had a 32 minute game that we’ve put together all year so we picked a nice night to do it,” Giles said.

What made Corona Centennial’s win so impressive beyond overcoming the craziness that is playing Sierra Canyon, is that the Huskies are young. They start four sophomores and a junior. Sophomore Kylan Boswell looked like a savvy veteran scoring 24 points and hitting six threes. He’s a special talent, but even the role player underclassmen stepped up on Friday.

No one epitomized that more than sophomores Aaron McBride and Devin Williams. McBride scored and got fouled on the Huskies’ penultimate basket in the game after a sequence where Sierra Canyon ferociously pressed and nearly had two turnovers.

Williams dunked the dagger with 48 seconds to play to put Centennial up 80-72. Both played tremendous defense to limit Sierra Canyon getting easy looks at the rim as well.

“In all of these games you have those unsung heroes,” Giles said. “Devin was for sure an unsung hero for us. Aaron McBride was fighting all game against those monsters that they have. That was awesome.”

Williams finished the game with 12 points. McBride had nine. The other two Huskies starters, junior Donovan Dent and sophomore Jared McCain, scored 21 and 16 points respectively. Bailey paced Sierra Canyon with with 33 points, including a 13 point third quarter, but it wasn’t enough. James came off the bench and put in seven points.

Friday’s win marks the end of the season for Corona Centennial as they have opted out of the state regional playoffs choosing instead to play in front of college coaches in Arizona.

“For these guys to go 16 months without playing in front of college coaches, to me, that took precedent,” Giles said.

Centennial will head down to Arizona next week as Open Division champs.