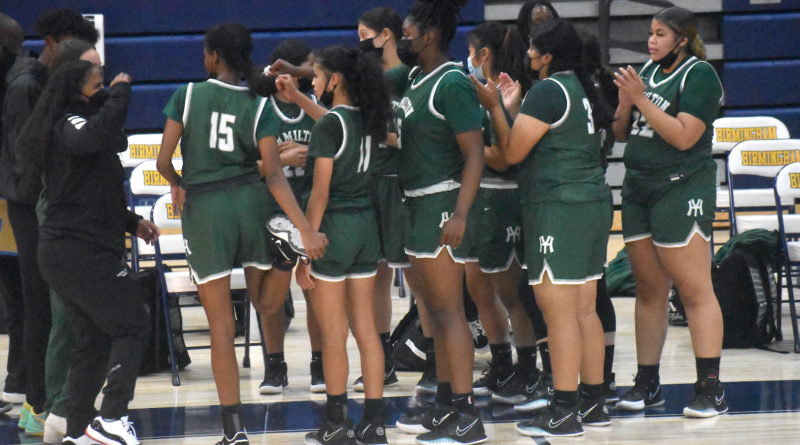 LAKE BALBOA– Hamilton won the fourth quarter 14-4 en-route to a 56-42 win against Birmingham on Wednesday, and has now made it to the L.A. City Section Open Division finals for the second straight season.

The Lady Yankees’ seniors led the way offensively, as Sydney Blevins and Trinity Conner both scored 16 points, and Sherisse Chensam finished with 14 points and three assists.

Hamilton starting forward Mary Bimat-Townsend, one of their defensive anchors, was out for this one, but is expected to return for the championship against Palisades on Friday.

In her absence, Lindsey Black-Ross, who has been one of the most improved Lady Yankees this season, got extended playing time and finished with eight points. She had a physical impact all game shining in the archetypal “energizer” role – defending multiple positions, pounding the glass, fighting for loose balls, and finishing plays inside, in addition to recording three dimes. Conner and Chioma Okenwa also contributed to a strong effort on the glass that made it difficult for their opposition to sustain momentum. Conner had six assists as well.

Bita Hashemi led Birmingham with 13 points, 11 of which came in the second half. Janna Holley scored 12 points, 10 coming in an excellent first half in which she was able to dictate the flow of the game offensively, and also totaled six assists. Hamilton came out in the second half substantially geared up against stopping her penetration, and it was a deciding factor in the game. Lily Ramos added eight points for the Patriots.

The Patriots had two significant absences as well – starting SG Samantha Velasquez, who has often assumed a secondary playmaking role this season, and another wing in the core rotation, Aliah Medina. Both could have helped significantly in spacing the floor, and both are plus-defenders with high motors too. Birmingham executed well within its half-court sets, but often struggled to unclog a zone Hamilton went to for some important stretches of the game.

Blevins has been arguably the most dangerous scorer in the section this season, and Birmingham made the gutsy of move of having C Jaz Washington face-guard her nearly the entire game, as opposed to assigning a smaller guard. Despite Blevins’ 16 points, Washington did a great job of forcing her into tough shots and keeping her from taking over the game. On the flip side, it kept Washington away from protecting the paint – it’s a tradeoff.

Hamilton will be on the road again on Friday night seeking revenge against rival and reigning champion Palisades with a section title on the line.