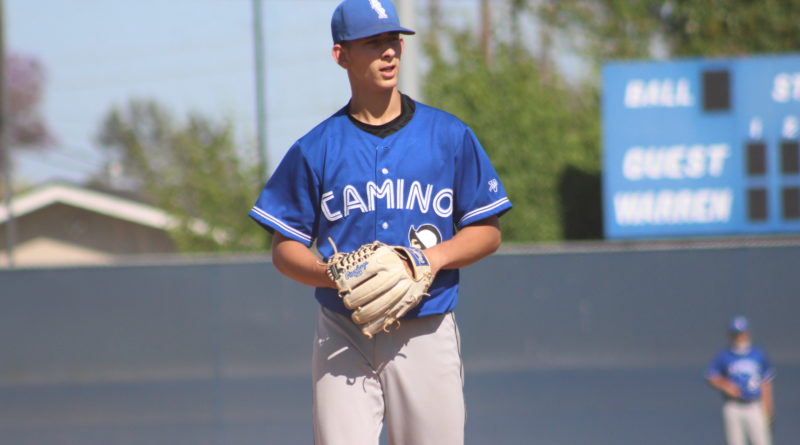 First, he decided to pull starting pitcher Joseph Schneider in the second inning after he had walked the first batter he faced in the frame. At that point, the Conquistadors were already trailing 1-0 following a Matias Nolasco solo home run in the first inning.

“Schneider’s been our number two guy and started every Thursday league game for us,” Lienhard said. “But once he couldn’t find the strike zone, I brought Edric in.”

“He did outstanding today,” Lienhard said. “Today’s the most pitches he’s thrown all year. He did fantastic. I couldn’t be happier about him.”

Lienhard also chose to put junior Troy Spellman in the starting lineup on Thursday. Spellman is usually a reserve, but he had such a good practice on Wednesday that Leinhard felt he needed to pencil the junior in on the lineup card. Spellman batted sixth and reached base all four times he came up, including a two-RBI triple in the top of the fifth inning that gave the Conquistadors their first lead of the game at 3-1.

“In batting practice yesterday, Troy was just spraying everywhere so I rewarded him and luckily it paid off. He made me look good on that one,” Lienhard joked.

El Camino Real is the No. 11 seed in the Open Division and Roosevelt was No. 3. There was some controversy with the Open Division seedings when they initially came out and eventually the City Section changed the bracket. Lienhard had no issue with his team coming in at No. 11 in the updated bracket, but he wished some of the other teams from the West Valley League were given better seeds.

“I thought [the West Valley League teams] should have gone one through four,” he said. “Chatsworth four and Birmingham three, but it is what it is, I knew we’d have to beat somebody. I had a feeling that we’d probably be a ten and you know what we had that loss against Taft and went 4-6 in league so there was no way we deserved a home game in my opinion. We didn’t earn it, but I told these guys that this is playoff baseball, it’s a clean slate and we can do this and it’s been so far so good.”

El Camino Real beat No. 6 Sylmar 9-1 in the first round. The Conquistadors will now play the winner of No. 10 Chatsworth and No. 2 Cleveland in the semifinals on Wednesday.