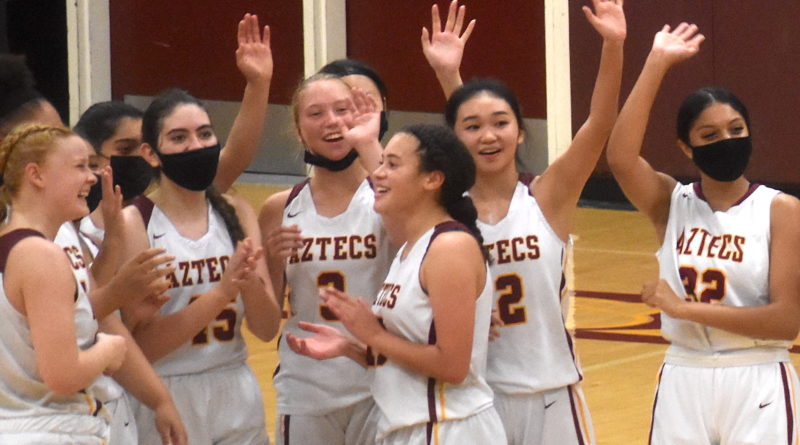 Esperanza, whose thrilling run to the CIF Southern Section Division 1 girls basketball finals has been one of the best storylines this postseason, makes its debut in this week’s rankings at No. 19. Undefeated Mater Dei (19-0) and Corona Centennial (21-0) still occupy the top two spots and will meet Thursday in the CIF-SS Open Division finals.

SBLive’s statewide California high school girls basketball rankings are compiled by reporter Lance Smith and are released weekly throughout the spring 2021 season. Here are the rankings for the week of June 7.

The Monarchs beat Harvard-Westlake 61-56 to seal another CIFSS Open Division finals appearance. Thursday’s title game against Centennial should be exciting as it gets.

Centennial reeled off yet another lopsided win over an elite opponent on Wednesday, a 97-71 victory against Windward.

The Barons defeated Bishop’s 66-57 to open the postseason, and have a huge semifinal rematch looming against LJCDS.

Cathedral survived a 61-54 test against Mater Dei Catholic to open up the playoffs. As the top seed in the San Diego Section, they get to avoid Bonita Vista and LJCDS in the semifinals, but Mission Hills is still a team no one wants to face.

The Torrey’s 63-36 win against Mount Miguel was easily the most impressive of the first round of the CIFSDS playoffs.

The overwhelming favorite to win the Central Section, Clovis West opens up the postseason against Clovis.

H-W got going from the field a little too late in the fourth quarter against Mater Dei with a Southern Section Open Division finals birth on the line. But a five-point loss against the Monarchs to snap their double-digit winning streak is not worthy of moving them down in the rankings.

For the second straight week, the Rams sit at eighth following a week without action.

The Monarchs blew out Capuchino on Friday to open their postseason.

While the Wildcats weren’t able to give Centennial a run for their money, going 2-1 in pool play with wins against Orangewood and West by 33 total points was a great CIFSS Open Division showing.

Pinewood’s playoff match against St. Ignatius on Wednesday could be one of the Bay Area’s top games of the year. And the Panthers will come in as the favorite.

In the absence of two of its best players, not only did Etiwanda play Mater Dei and Harvard-Westlake, the second and third seeds in the CIFSS Open Division, down to within 10 points each. But the Eagles even managed to beat Lynwood in the pool play finale after the Knights beat them by 17 points to close the regular season.

The Pride finished the season with just one loss, coming against St. Mary’s.

While the Knights had a challenging go of Open Division pool play, they’re still a clear top-20 team in the state with room to spare.

The Spartans had a rough time in pool play as well, but their 12-8 record belies the tremendous season they’re having.

Poly is now playing its best ball of the season, beating Bishop Montgomery and Fairmont Prep by over 20 points each in the Division 1 quarterfinals and semifinals, and looking like an Open Division contender for much of their win against Fairmont. They’ll face another formidable squad in the championship game against Esperanza, but will come in as the clear favorite.

Now in the CIFSDS Division 1 semifinals, the Grizzlies have proven all season long to be a top-four team in San Diego. Their next match against Cathedral is intriguing, as Mission Hills already lost twice to the Dons early in the season. The first one was a blowout, but the second time, it came down to the wire.

The Aztecs thrilling run to the CIFSS Division 1 finals has been one of the section’s best storylines this postseason.

They beat Serra (Gardena) in the second round on a half-court prayer:

They came back from down 17 at Sierra Canyon to win in the final minute:

And won another thriller against Rosary Academy in the semifinals.

After opening the season with losses against Mater Dei and Aliso Niguel, they enter the CIFSS Division 1 title game having won 21 straight. But Long Beach Poly will be the biggest test of their win streak and postseason run.

Despite losing in lopsided fashion against Poly in the semifinals, the Huskies still jumped from last week thanks to great wins against Chaminade and Roosevelt.

The Royals lost in painful fashion against Esperanza in the semifinals, but will likely make a state playoff birth – and return their whole core next season as well.

Blowing a 17-point lead and losing in the final seconds against Esperanza was about as tough a way to end a season as possible – especially with Izela Arenas out. Still, for a team led largely by freshman to start and finish the season as a clear top-25 team in the state is an outstanding feat.

Roosevelt got taken down in the CIFSS Division 1 quarterfinals by Fairmont Prep, but had an outstanding season, and beat Flintridge Prep and St. Anthony before facing the Huskies.

SI opened the playoffs with a win over strong Menlo School team. Up next is one of the best foes they’ll face this season – Pinewood.