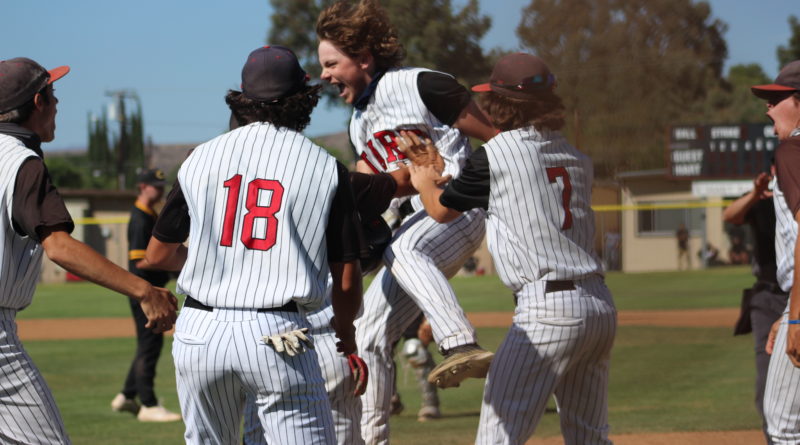 SANTA CLARITA, CALIF. — Get used to hearing the name Brayden Jeffries. Hart’s freshman starting shortstop and No. 2 hitter went 1 for 2 with a two-run home run in Tuesday’s 5-2 second round playoff win over Cerritos. He finished the game with three RBIs.

And for half of the season, he played JV.

“Early in the year we didn’t bring him up because of the COVID thing,” Ozella said. “We had all of these COVID rules where we couldn’t mix groups and he was with the JV’s so we waited and waited and then when we had spring break, we brought him up. He’s been our starting shortstop and No. 2 hitter since then.”

So far this season Jeffries has helped Hart secure their first Foothill League championship since 2018 and now he’s come up clutch in the postseason.

“He’s made a big difference for us,” Ozella said.

Hart’s other star is junior catcher Matt Quintanar, a Pepperdine commit. He went 3 for 3 at the dish with two doubles and two RBIs.

On Tuesday, those two rolled, but in the top of the seventh the Indians still ran into some trouble.

Cerritos had the bases loaded trailing 5-2 with two outs, which forced Ozella to pull starter Jake Villar. Massimo Vega then entered and recorded a one pitch save after getting Cerritos second baseman Edgar Lorenzo to fly out.

Hart had a bye in the first round of the playoffs and had only played Foothill League opponents in the regular season due to COVID-19 restrictions imposed by the The William S. Hart Union High School District. Tuesday’s game was also the first time that the District allowed Hart and its opponent to sit in their dugouts.

“Having guys in the dugout and playing someone else today was really fun,” Ozella said.

Hart plays Calabasas in the D3 quarterfinals on Friday.