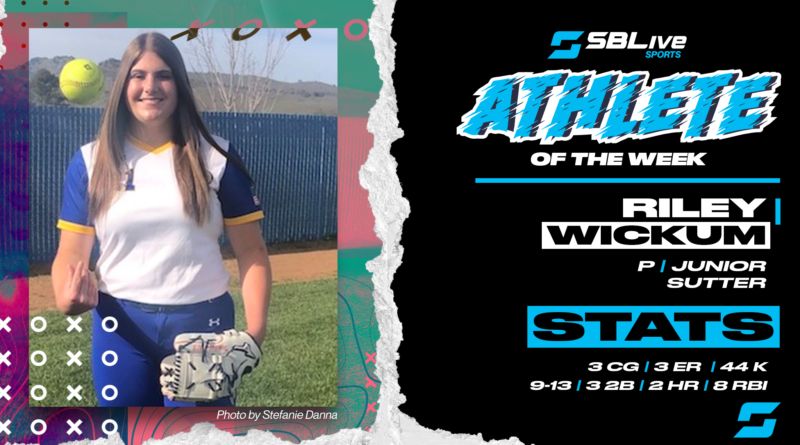 Congratulations to Sutter junior Riley Wickum for being voted SBLive’s Northern California High School Athlete of the Week for May 24-30!

Wickum ran away with this week’s honor, receiving 86.96% of the total vote.

Reegan Floyd, Lassen softball: Floyd led the Grizzlies to a 2-0 week pitching 11.2 innings, allowing just one earned run, racking up 18 strikeouts, and getting the win in both outings. She also hit 4-6 with three doubles and a home run, and scored six total times.

Aubrey Smith, Oakmont softball: Smith led Oakmont to a pair of blowout wins batting 5-7 with a double, a homer, five RBIs, and three runs scored. She also pitched seven innings between the two games and allowed just one earned run.

Nolan Stevens, Franklin (Elk Grove) baseball: In a three-game sweep of Jesuit, Stevens threw a complete game shutout and went 5-8 with a double, a triple, three RBIs, and two runs.

Rockwell Lybbert, Davis baseball: Lybbert led the Blue Devils to a 2-1 series win over Cosumnes Oaks batting 7-10 with three doubles, plus throwing 5.1 innings with only two earned runs allowed in a win.

Ty Uber, Ponderosa baseball: Uber helped lead Ponderosa to a three-game sweep of Rio Linda batting 5-8 with four runs and three RBIs, plus a win on the mound in which he threw four hitless, scoreless innings and K’d nine.

Gabe Barrett, Mountain View baseball: Barrett led Mountain View to a 2-1 week going 6-9 with a double, a homer, and eight RBIs. He also turned in a great outing on the mound despite a loss with one earned run allowed in 6.2 innings.

Will Tatista, University Prep (Redding) baseball: In a 2-0 week for the Panthers, Tatista went 6-9 with two doubles and six RBIs, and threw a complete game on the mound with no earned runs (two unearned runs) allowed.