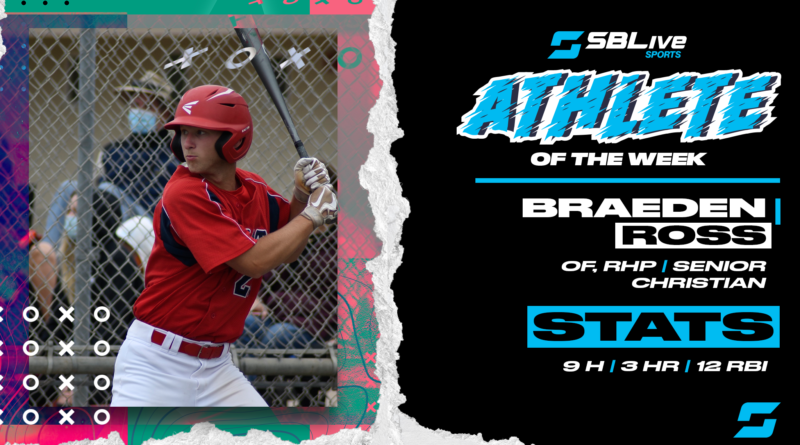 Congratulations to Christian senior Braeden Ross for being voted SBLive’s Southern California High School Athlete of the Week for May 24-30!

The senior had nine hits, including three home runs and 12 runs batted in to help the Patriots sweep High Tech in league play.

Ross ran away with this week’s honor, receiving 94.27% of the total vote.

Kassius Thomas, Sierra Canyon RHP: Thomas allowed only one hit and struck out 14 batters to help the Trailblazers take down Windward, 3-0.

James Ellsberry, Big Bear OF: Ellsberry had two doubles and five runs batted in during last week’s 14-6 win over Academy for Academic Excellence.

Troy Barbarin Jr, Arlington G: Barbarin has seven three-pointers in his last two games, giving him 77 on the season.

Kyle Frelow, Heritage Christian F: Frelow had 106 rebounds for the Warriors during the month of May, averaging nearly 12 per game.

Julia Cosalan, Bonita Vista G: Cosalan has 24 three-pointers in her last three games including 11 during a win over Chula Vista last week in which she finished with 39 points.

Dejah Saldivar, Xavier Prep (Palm Desert): Saldivar has made a three-pointer in 25 of 26 games during her freshman season and made six during a win over Pioneer last week.

Alyssa Thompson, Harvard Westlake F: Thompson had four goals in the CIF Southern Section Division 1 Championship to help the Wolverines to a 5-0 win over Villa Park.

Joe Avalos, Valhalla G: Avalos has 61 points over his last two games against West Hills and Morse while hitting 13 three-pointers during that time.

Conner Udolph, Westlake M: Udolph is averaging four goals per game so far to help Westlake Lacrosse to a 17-2 record. He had ten goals in the win over Oaks Christian.

Olivia Gritzmacher, Newport Harbor M: Gritzmacher has scored 92 goals so far this season and had four goals and three assists in last week’s win over Chaminade.

Allie Lee, San Marcos A: Lee has scored 19 goals in her last three matches and had ten goals in a 14-13 win over La Costa Canyon.