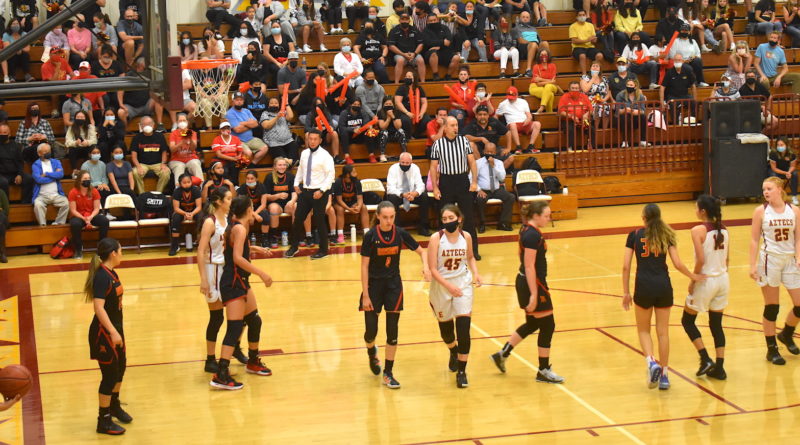 Kaylee Byon led all scorers with 29 points and had double-digit rebounds, but Esperanza had four players finish with 13 or more points. Here are three takeaways from the game, and game photos at the end:

Coming in as something of an underdog, trailing by nine points in the first quarter, and missing some of their first shots by several inches, the Aztecs probably said, “We got them right where we want them.”

After all, that was roughly what it took for them on Wednesday at Sierra Canyon to play an incredible second half and win their quarterfinal in dramatic fashion, which came right after beating Serra (Gardena) on a miraculous half-court buzzer-beater.

MORE: ESPERANZA BEATS SIERRA CANYON IN GAME OF THE YEAR

And on Saturday, withstanding a scoring onslaught and letting the offense wake up at its own pace proved to be the winning formula once again. They never looked rattled when Rosary Academy dominated out of the gate and led 11-2 a little over three minutes into the game. Rosary wouldn’t score again for over a quarter’s worth of time, until nearly half of the second quarter was through, and Esperanza led 28-20 at halftime.

Esperanza kept firing on all cylinders to start the second half, and eventually led 43-30 in the third quarter.

But the Royals got going again on offense late in the third quarter, including two threes in rapid succession by both Mary Larson and Allison Clarke (12 points), and started accruing momentum. They erased the lead entirely and led 57-56 on two Byon free throws with 2:14 left in the fourth. However, that would be the last time they’d lead, as Esperanza had just enough juice left to close them out.

Like many of Esperanza’s biggest wins, this game was truly a joint effort, and not just in the point totals. The scoring itself was spread around – Alyssa Kubo (17), Julia Lavigne (15), Emily Briggs (14), Kaiya Mack (13) all scored in critical junctions throughout the game – but what’s more, all four of them are threats to initiate the offense and create for themselves or others. Each one of them has at least six total assists in their last two games. So in crunch time, there’s simply no way to force the ball out of the right person’s hands, because any Aztec on the floor can be the right person.

After coming so close to pulling off the comeback, this loss stings for Rosary Academy. Some say “only one team can finish the season happy”. But actually, the Royals have proven that that’s not always the case after all.

In the 2018-19 season, the Royals got swept in Open Division pool play but went on to win championships at the CIF Division 1 regional and state level. In the 2019-20 season, they did the exact same thing, except had to settle for just a Division 1 Southern Region title because the pandemic-related shutdowns started in California the week of the title game.

In 2020-21, they will be a bigger underdog in the hunt for another Division 1 regional title than the last two seasons, but they’ll still likely make a birth. Assuming they do, the Royals will be a threat to go all the way once again, which could even potentially include a rematch with Esperanza.