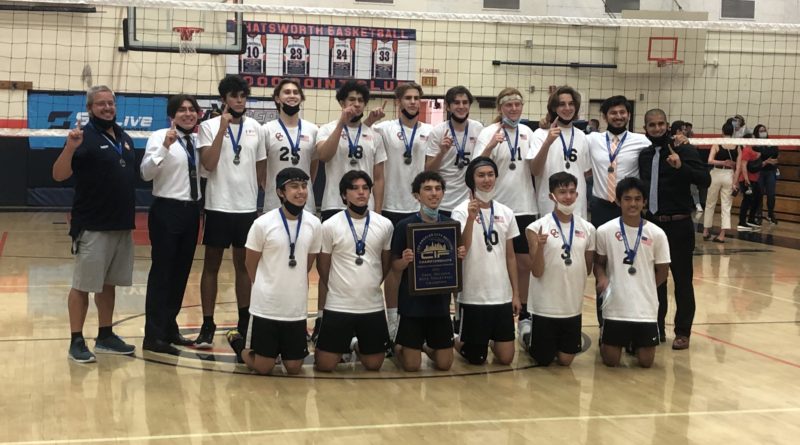 CHATSWORTH — Mere minutes after Chatsworth had secured its first ever boys volleyball Open Division City Title, one Chancellor player whispered to another: “aren’t you glad you didn’t quit?”

Back in the spring, every player was in Zoom school with no option to return to campus. At that time, playing high school sports violated health protocols. Having a volleyball season, especially an indoor one, looked bleak.

“Three months ago, these guys were ready to tap out,” Chatsworth head coach Sina Aghassy said. “Credit to CIF and LAUSD for getting this together and for the coaches who stayed patient this whole time working with our kids.”

In a COVID-19 tainted school year, Saturday’s 3-1 championship win over Taft will be a good memory for Chatsworth’s players following so many bad ones.

“These guys have had to come to grips with having two seasons cut short by the pandemic,” Aghassy said.

Indoor volleyball returned to the LA City Section in April and this spring Chatsworth made the most of the opportunity they weren’t sure they’d get. The Chancellors went 15-0 in a season that began outside and then moved inside. Following their City Title win, Chatsworth will now compete in the CIF-State regional playoffs.

In the first set, Taft did a nice job of slowing down Chatsworth’s top player, junior outside hitter CJ Blankenship. But in the final three sets, Blankenship adjusted to lead the Chancellors to victory. He finished with a team high 15 kills.

“When he’s going, we are a different beast,” Aghassy said.

Aghassy played under Taft head coach Armin Mercado for the Toreadors from 2007-2010. On Saturday, they faced off as head coaches.

“Back in 2015 when I took over at Chatsworth, I always thought of what it would be like playing my mentor in a Championship Game,” Aghassy said in a Facebook post before the game started.