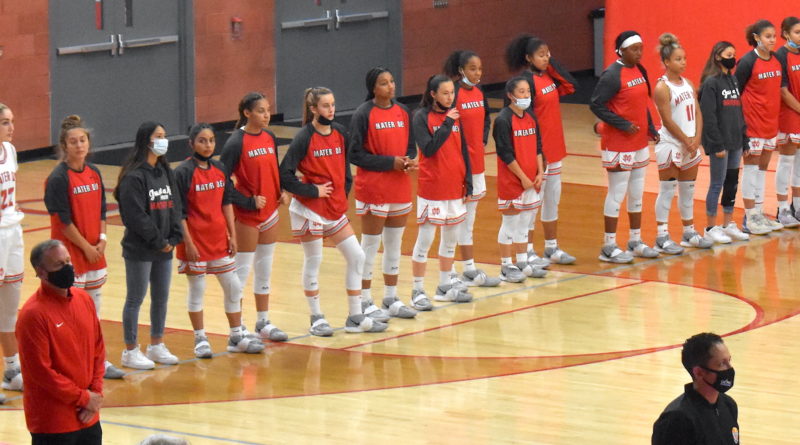 SANTA ANA– While the final margin was only five points, Mater Dei was in control for most of the night on Friday to defeat Harvard-Westlake and clinch a spot in the Southern Section Open Division championship game. Here are five takeaways from the game:

WHITE COMES UP BIG OFF THE BENCH

Coming off the bench, Lani White led Mater Dei with 16 points and nine rebounds in this one, and was generally an injection of energy any time the Monarchs needed a spark.

In the first half of the game, Mater Dei got in its own way with an uncharacteristic amount of turnovers. The Monarchs forced some in turn, but Harvard-Westlake’s advantage in points off turnovers – and field goal attempts – was the main thing keeping it close. And while the Wolverines played a very strong game against them defensively, most of their turnovers were unforced.

Brook Demetre was held scoreless through three quarters, but set a good example of how to minimize the impact of having a rough night offensively.

For one, matched up with Kiki Iriafen on both ends for most of the game, she expended lots of energy on defense and the defensive glass to keep California’s most dominant center from taking over the game. But even on offense, she stayed engaged and kept moving, and kept shooting the wide-open ones, all of which forced Iriafen to continue chasing her around on the perimeter. That meant the Wolverines’ sole interior force couldn’t wait around in the paint to protect the rim and clean the glass, and had to expend energy as well.

Plus, when Demetre eventually got going from the field, her nine fourth quarter points were a big help in pulling away.

Fortunately for Demetre and Iriafen, they won’t have to face each other for a good few years come fall, as they’ll be teammates at Stanford.

The Wolverines played very strong defense, but overall had an iffy shooting night, and their spacing around Iriafen collapsed a bit in the second half. They lost a game by only five to one of the best teams in high school basketball after leaving at minimum 12 points on the table missing open layups.

The final score made the game seem a bit closer than it was at the very end because of a late shooting surge by the Wolverines – five points was their smallest deficit in the fourth quarter – but the last couple minutes of the game still showed H-W could get some offensive flow outside of Iriafen against Mater Dei.

Put it all together and Harvard-Westlake can enter the upcoming state playoffs knowing it made it to the de facto section semifinal and pushed Mater Dei to the last minute of the game without bringing its complete A-game. The Wolverines should be excited for another shot at a postseason run knowing their best may be yet to come.

Iriafen led them with 21 points, and led the game in rebounds. Kimiko Katzaroff also scored 17 points for H-W.

MATER DEI ONE GAME AWAY FROM REPEATING AS CHAMPION

Now 19-0, the Monarchs have advanced through what many thought of as the tougher of the two Open Division pools, beating Etiwanda, Lynwood, and Harvard-Westlake all by single-digits. Mater Dei could be one more win away from pulling off another Open Division title, this time in unbeaten fashion on the season. That said, matchups aside, the Monarchs will face their biggest test of the season next game against the state’s other unbeaten alpha dog, Corona Centennial.

The Monarchs are without Pepperdine-signee and star F/C Meaali’i Amosa, and just made it through the playoff matchup in which they could’ve used her the most.

Should they win the championship, they’ll have the opportunity to finish an unbeaten season with a CIF Southern Region Open Division title in the state playoffs. And if Mater Dei comes up short in its repeat bid, the state playoffs will be right there for them to possibly redeem themselves, and potentially finish with both a section and state title at the Open Division level in the span of two seasons.