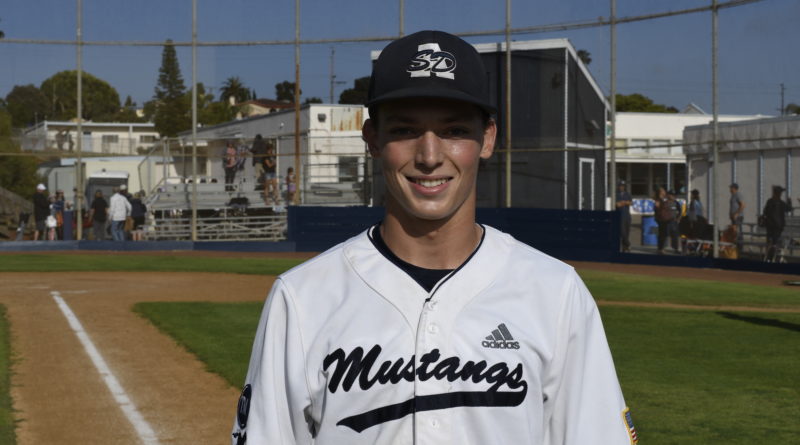 ENCINITAS — In a year where seemingly all of the teams in the San Diego Section have relied on the long ball, San Dieguito Academy opts for a much different approach.

After a leadoff walk in the fourth inning of Thursday’s de facto league championship, the Mustangs got to work by bunting for a base hit on three of their next four plate appearances and caused mass confusion within the Mission Vista infield. San Dieguito kept the rally going by scoring four runs in the inning, that featured all nine batters coming up to the plate.

“They’re a very good team but we knew we had it, we tried to play good baseball and get back to our bunts. We had three in a row (in the fourth inning) and that’s kind of our brand of baseball,” senior Rylan Wade said after the game.

It was Wade who walked to start the fourth inning and came around to break the scoreless tie.

“It’s just something where we make the other team make plays,” Wade said of his team’s strategy to bunt. “We put the pressure on them and it makes it easier on us.”

Following the Mustang’s four-run inning, Wade came out of the designated hitter’s spot and took over on the mound for San Dieguito.

The Mustang’s cushion was short lived when Mission Vista junior shortstop Ian Halverson launched a three-run home run over the left field wall, cutting the deficit to 4-3 in the top of the fifth inning.

Wade didn’t let the Timberwolves’ rally get to him, retiring the next seven batters he saw, to preserve the 4-3 win and clinch the Avocado East League crown.

“I was just trying to hold them, throw good pitches and hit my spots,” Wade said.

The Mustangs will head into next week’s San Diego Section Division 3 playoffs and have guaranteed themselves a first-round home game by virtue of their outright league championship.

“I think we just have to have different guys perform every game and all be focused on winning,” Wade said of a potential playoff run.